On the Christmas Treetop, a Star! 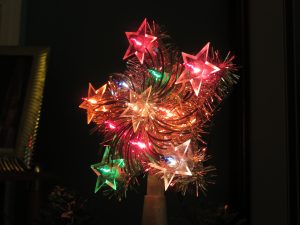 In the mid-1980s, my parents purchased a five acre lot that was pretty much covered in Florida palmetto scrub. My father worked the land to clear two driveways and a section where a home could eventually be built. We acquired 10,000 pine seedlings that were planted on the property, surrounding the perimeter of the acreage and lining the driveways.

Before owning our acreage, the family Christmas tree had always been a cut pine tree of some kind or another. When the property was obtained we still had a live Christmas tree but dad insisted that it be potted instead of cut so that it could be planted on the land after the holiday season. As you can probably imagine, there weren’t quite as many varieties of potted pine trees that were suitable as a Christmas tree.

I remember very weak branches on most of our potted Christmas trees that couldn’t hold heavy ornaments; the tree topper was no exception. So during those years, the lights became very small, mostly white and the decorations were kept much lighter. Our tree topper was a colorfully lit star. Since it was composed of plastic and some metal-looking fringe or tinsel, the construction made the topper feathery light enough to be used on a potted pine tree. Our potted Christmas trees maybe weren’t the most lavish or lush, but I love the earth and believe that it is almost always better to plant a tree than to cut one down.

I also fondly remember that my dad was an integral part of our Christmas tree tradition. He especially influenced the years we decorated potted pine trees and topped them with that lightweight, colorfully lighted star.

Dear God, we thank You for the beauty of the earth and that You have called us to be good stewards of Your creation. We welcome the opportunity to beautify trees with Christmas ornaments simple and elaborate as we celebrate Christ’s birth. In His name, we pray. Amen.