On the Christmas Treetop … a Star! 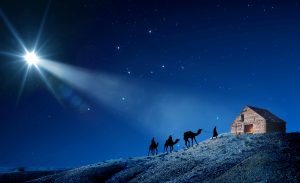 Why would one choose to place a star on top of their Christmas tree? As early as Numbers we read, “a star shall come out of Jacob” as a prophecy of Christ’s birth. A star appears in one of the Nativity stories found in the Gospel of Matthew. In Chapter 2 verses 1-2, we read, “In the time of King Herod, after Jesus was born in Bethlehem of Judea, wise men from the east came to Jerusalem, asking, ‘Where is the child who has been born King of the Jews? For we observed His star at its rising, and have come to pay Him homage.” It was the star that guided the wise men to seek this newborn king in the first place.

From the scripture we learn that King Herod was quite concerned to hear this news and to discover that there were people outside his realm coming to pay homage to this infant. Herod then asked these wise men as to the exact time that star appeared.

For the role the star played in the Nativity story, the reader is invited to read Matthew 2:1-12 throughout the season of Advent, particularly on those days with stories of stars as tree toppers. I admit that I thought a star was the most popular Christmas tree topper, but the majority of contributors to this Advent Devotional have displayed an angel as the finishing touch of their Christmas tree.

O Lord at this season of the year we often look forward to hearing, “O Holy Night” and singing, “the stars are brightly shining.” We thank You for the star that shone brightly, that led Wise Men to You and for the stars that cause us to pause and marvel. In Jesus’ name, we pray. Amen.