On the Christmas Treetop, Stars?! 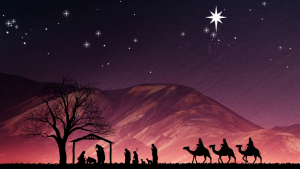 As many of you know, I love Christmas and for years I have taken great pride in my Christmas tree as I decorate it with ornaments that I have been collecting since I was a young teenager. At a Christmas Shop in Gatlinburg, Tennessee, I purchased a pretty gold filigree eight pointed star that was made in Germany. It had a coil wire base allowing it to slip over the uppermost branch. It was not terribly expensive. I also bought some ornaments made of the same material that I place on the tree. All of these I have owned at least for forty years and there is not the slightest bit of tarnish on any of them and they look just like they did when I bought them.

A few years later I saw in a Metropolitan Museum of Art catalog “the” star to use as my tree topper. I thought it would really add something special to my tree. It would replace the other star. It was a modern motif that featured stars and crescent moons that created a star. It was made of sterling silver and had gold accents. It was expensive and within a few years, it had tarnished appreciably. Though I can only use one as a tree topper, I use this one because of lessons I have learned from these two stars.

First, something less expensive can be better than something more costly. While the star made in Germany is still pretty, since it is made of material of this world, sooner or later it will tarnish, become more fragile and pass away ultimately as all things on this earth. Second, like the Metropolitan Museum of Art star we are tarnished by sin and that is why God gave us His Son to be our Savior. Last, though we are tarnished by sin, God has never discarded us … we are important to God and so greatly loved by God. As the star guided the Wise Men to the place where the Christ child was; so these stars have taught me some valuable lessons; worthy pondering again in this Advent Season.

Lord of heaven and earth, we bow before You in reverence thankful for lessons we learn on our pilgrimage of faith. As You guided the Wise Men by a star to the house where they would find the Christ child, so continue to lead us that we may follow our Risen Savior more closely on our path of Christian discipleship. Amen.