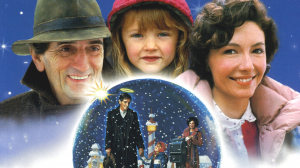 But Jesus looked at them and said, “For mortals it is impossible, but for God all things are possible.” Matthew 19:26 (NRSV)

One Magic Christmas is a 1985 American holiday film from Walt Disney Pictures starring Mary Steenburgen and Harry Dean Stanton. I see Christ in the angel Gideon as well as God in the character of Santa in the movie. Like Jesus does in the Bible, the angel Gideon works a number of miracles in the film. At the beginning of the movie, it is Santa, or God, who instructs the angel Gideon to find Ginny Grainger and remind her of the Christmas spirit. Ginny is the mother of two children, Abbie and Cal. Ginny’s husband, Jack, has been out of work since June, and the family is being evicted from the company house and has to be out by January 1. Jack enjoys fixing bicycles in their basement and hopes to give a bike to his children’s friend, Molly Monaghan, who is poor and that’s all she wants for Christmas. Although Jack would like to open a bike shop of his own, doing so would use up all the Grainger’s savings, which Ginny sees as a foolish move. In order to make ends meet, she works as a cashier at a grocery store. Christmas is looming on the horizon which is causing even more trouble for Ginny and, like Scrooge, she loses sight of the true meaning of Christmas. The angel Gideon shows Ginny what life would be like without Christmas – and that vision is pretty grim. During the film, Gideon tells Abbie that some things are going to happen in the future and not to be afraid. And when Abbie runs away to the town’s Christmas tree in hopes of finding Gideon to ask him to bring back her dad, Gideon tells her that he can’t fix things like what happened to her dad. He tells her that the only person who can bring him back is Santa Claus. The story reminds us that we should not be filled with bitterness because of life’s unfairness but instead focus on our blessings and occupy ourselves with helping those less fortunate, especially at Christmas. In the end, Ginny realizes the true meaning of Christmas… that God can do the impossible.

Why I like the film so much and how it became a holiday viewing tradition with me: I like this movie because it reminds us to celebrate what we have and not what we want. The love of family is more important than any present could possibly be. Caring for those less fortunate can also be more of a gift for the person giving than for the one receiving. I remember seeing this movie in the past and having now rediscovered it, I plan to have it be a holiday viewing tradition.

Loving and Compassionate God, this is the most wonderful time of the year. We praise You for the glorious gift of Your Son, Jesus Christ. May we celebrate all of our blessings each and every day and focus on all that You have done for us and will continue to do. We praise You and give You thanks. Amen.