One of the Miracles at Pentecost 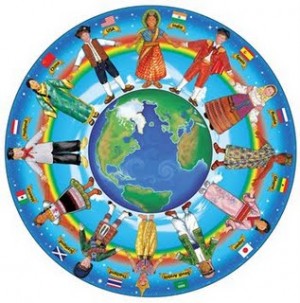 “Now there were devout Jews from every nation under heaven living in Jerusalem. And at this sound the crowd gathered and was bewildered because each one heard them speaking in the native language of each.” Acts 2:5-6 (NRSV)

In May 1997, its 25th anniversary year, Mother, Dad and I visited Walt Disney World for the first time. In addition to all of the attractions competing for my attention, I must admit that I was taken aback to hear so many different languages by those visiting Walt Disney World. Now I had been to other places in this country that attracted world visitors and I myself had visited in Austria, Germany, and Switzerland, but I had never experienced so many different languages being spoken in one place as I did at WDW. It was so astounding that it isn’t any wonder that my favorite place at WDW was and is “It’s A Small World.”

On that visit it did not seem that the world was very small at all. I felt dwarfed by being surrounded by so many languages that I did not speak or understand while realizing that many of the visitors speaking in their native language understood what we were saying because English is their second language or another language they know and speak. Oddly enough, one does not have to be surrounded by a variety of languages being spoken for the situation to be disconcerting. I experience those same feelings when I am in a group and there are so many people speaking at once … and it is English they are speaking!

I cannot explain how those Jews living in Jerusalem from every nation under heaven heard what was being said on the Day of Pentecost other than it was the miraculous power of the coming of the Holy Spirit. It is no wonder that they were amazed, astonished, and bewildered! Of course, another miracle occurring at that time could have been that they were actually willing to listen to one another!

When everyone is talking at once it is hard to hear what is being said; for communication depends upon listening and speaking. Parthians, Medes, Elamites, residents of Mesopotamia, Judea, and Cappadocia, Pontus and Asia, parts of Libya belonging to Cyrene, Romans, Cretans and Arabs were hearing in their own languages what was being said about God’s deeds of power. It is as if we see a forerunner of the United Nations where one language is being spoken while all within that place or space are equipped with earphones to hear an interpreter repeating to them what has been said in their own language.

Almighty God, we live in this great big beautiful and wonder-filled world that You created. This world becomes a smaller place when we listen to You and when we strive to listen and understand one another. Help us to love one another and to cooperate in working for peace and justice for all the world’s peoples. In Christ’s name, we pray. Amen.