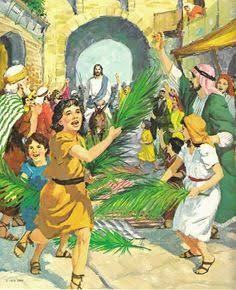 Parades … the grander they are the better I like them! The two parades that I almost never miss are the Macy’s Thanksgiving Day Parade and the Tournament of Roses New Year’s Day Parade. When I think of the Macy’s Parade, I always associate it with a favorite holiday film, Miracle on 34th Street. I am drawn to the Tournament of Roses Parade because of the flowers and am impressed by what emerges after months of labor by designers, engineers and the decorators.

The Palm Sunday Parade resembles what we often heard or saw in the previous century, namely, a ticker tape parade. These most often originated in New York City and military heroes, sports figures and other celebrities were often honored with them.

Now Jesus and His disciples were on their way to Jerusalem to celebrate the Passover with family and friends enjoying the wonderful food and celebrating God’s deliverance of His people from their bondage in Egypt. Jesus sent two of His disciples to arrange for the celebration and to secure a donkey for Jesus to ride into the Holy City. Once they brought back the donkey, Jesus got astride the animal and rode into the city with His disciples following Him. People separated and lined both sides of the roadway as Jesus approached. They were singing and shouting, “Hosanna! Hosanna! Here comes God’s kin! Hosanna! Praise God!” There were hundreds, thousands of people who were taking off their cloaks to make a carpet for Jesus. They were waving palms and lining the carpet with them too.

The crowds gave Jesus a royal welcome as He rode into the city, just like a king. But Jesus was a very different king – He was a king of peace. Not everyone understood that. Jesus was not at all what they were expecting.

Earlier I started to write, “Everybody loves a parade!” Yet, we know that is not true! Some people object to the person or persons being honored. There were parade detractors when Jesus rode into Jerusalem. There were people opposed to what He was trying to do and people who disliked Him. For a moment it must have seemed to Jesus that the whole earth was celebrating, but we know that was not true. Jesus tried to enjoy the moment and we should too when there is a parade, because the parade, like life, passes very quickly!