Pass It On: Dietrich Bonhoeffer 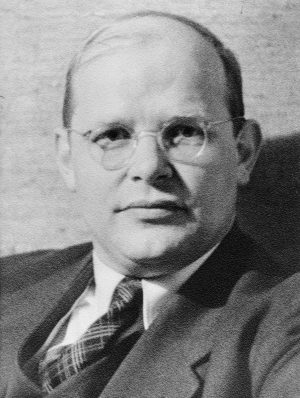 31The days are surely coming, says the Lord, when I will make a new covenant with the house of Israel and the house of Judah. 32It will not be like the covenant that I made with their ancestors when I took them by the hand to bring them out of the land of Egypt—a covenant that they broke, though I was their husband, says the Lord. 33But this is the covenant that I will make with the house of Israel after those days, says the Lord: I will put my law within them, and I will write it on their hearts; and I will be their God, and they shall be my people. 34No longer shall they teach one another, or say to each other, “Know the Lord,” for they shall all know me, from the least of them to the greatest, says the Lord; for I will forgive their iniquity, and remember their sin no more.

Dietrich Bonhoeffer was a German pastor and theologian who, in 1945, was executed by the Nazis. As a postgraduate student, he visited the US twice, was a professor at the University of Berlin and active member of the Confessing Church movement of Germany during the Nazis’ rise and then control. He pastored two German-speaking congregations in London, taught at underground seminaries in Nazis’ Germany, then as part of his work for the German military intelligence and resistance movement, was arrested and then executed or being a part of the failed 20 July Plot on Hitler’s life.

This quote is from his best-known book, The Cost of Discipleship which was a study on Jesus’ Sermon on the Mount that was published in 1937 in German then in 1948 in English.

Costly grace is the gospel which must be sought again and again, the gift which must be asked for, the door at which a person must knock.

Gracious Lord, it is indeed through the life, death, and resurrection of Your Son, Jesus the Christ, that we’ve been welcomed into such a new life, words do not say enough. In accepting that costly grace, may we truly follow Him with our whole hearts, our whole lives. Amen.