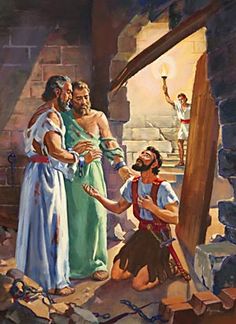 Earlier in the day they had been preaching and teaching about Jesus, the Son of God. Many of those who heard disagreed and objected to what Paul and Silas were saying. So opposed were some of the influential people who heard “their lies” and who “knew better” what God was like called for the pair to be arrested and thrown into jail.

Because they knew God was with them and that God would take care of them throughout that dark and scary night, they could offer prayers of praise and thanksgiving, sing hymns of joy, and could clap their hands. Suddenly the stone walls and iron bars of the jail began shaking. So violent was the disturbance that the iron doors swung open and the shackles on Paul and Silas feet came undone. They were free to escape, but would they? As soon as the earthquake stopped, the jailer ran to see if his prisoners were still there. He knew that if they had escaped his life was not worth anything.

Paul yelled out. “Don’t worry! We’re all here.” It was then that the jailer knew that God was good, and Paul and Silas were good people. They didn’t leave when they had the chance.

The jailer wanted to know more, so he asked Paul.

Paul told him all about Jesus. “If you believe,” Paul said, “then you will be saved.” The jailer believed.

The jailer took Paul and Silas to his home and fed them. The next morning the angry leaders apologized, and Paul and Silas continued their journey to share the Good News of Jesus Christ.

O Lord, Our Strength and Redeemer, help us too be brave when we encounter frightening situations. Remind us that You are with us and You will never abandon us. When we do become scared, we too, like Paul and Silas, may find comfort and strength through prayer, singing hymns of praise and clapping for our God. In Your Son Jesus’ name, we pray. Amen.