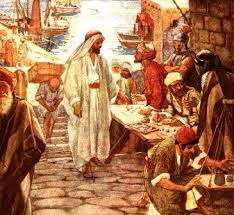 Does everybody know what time it is? No, it is not Howdy Doody time! A week from today (April 15) it is tax paying time!

They say there are only two things certain in life and they are: death and paying taxes! The ritual of paying taxes dates back at least to the time of Jesus and probably quite some time before His birth.

The religious leaders were always wanting to trick Jesus and with this query they thought they had Him for sure. They ask Jesus: So tell us, is it right to pay taxes to the emperor or not?”

To those asking the question, Jesus employs that frustrating technique of answering their question with a question. Jesus said, “Whose head do you see stamped on this coin?” as He pointed to a coin they were holding. They answered, “The emperor’s!”

Jesus added, “Then give to the emperor the things that are the emperor’s.” Then Jesus went for the jugular! He said, “But remember – everything God made is stamped with the image of God. So be sure to give God the things that are God’s.” Suddenly the religious leaders were made aware that much more belonged to God than they might have imagined and while the coin was stamped with the image of the emperor, it was made with ore that God made. In other words, technically everything belongs to God. Given their political and governmental situations, they were still expected to pay taxes to the emperor, just as you and I are expected to pay taxes in accordance to the regulations and rules of the Internal Revenue Service and to make our checks payable to. the United States Department of the Treasury

O Lord, no one really enjoys paying taxes, but the taxes are used to provide goods and services for the common good and to maintain our government. Help us always to remember that “The earth is Yours and all that is within it, the world and the people who dwell therein.” Grant that our taxes are used in wise ways and that our tithes and offerings serve to advance and expand Your kingdom. These things we ask in the name of Jesus the Christ. Amen.