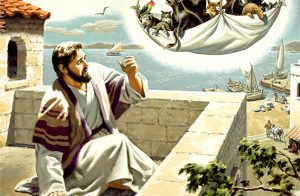 One of the Bible stories in which I have found emerging meaning as I have lived as a Christian is Peter’s dream (or vision) from Act chapter 11. The first level of meaning is found in how the editors of the Spark Story Bible for children re-tell the story:

After Jesus went to heaven, the disciples thought that only the people who were called Jews would be saved by Jesus. They thought other people, called Gentiles, would not be saved.

One night Peter had a dream. He saw two kinds of animals. God told Peter. “Eat all of the animals.”

“You said should eat only clean animals, not unclean one,” Peter replied.

God answered, “Both kinds of animals are okay.”

Peter woke up. “What does this dream mean?” he wondered.

Later, a man who was a Gentile asked Peter to tell him about Jesus. Peter wasn’t sure what to do. Then he remembered his dream. Maybe God was saying all people were part of his family! Peter rushed to the man’s house and told him about Jesus. The man believed. Peter was right! God wanted everyone to be saved!

That’s a good basic message from this story. God’s love did extend beyond the Jews (like Peter) to the Gentiles (like me – and maybe you.) Let’s rejoice at just how generous God is with God’s love.

God, thank You for loving me – in spite of who and I and how I am. Let me show that same love to those whom I encounter today. In Jesus’ name I pray. Amen.