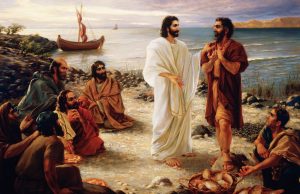 Jesus and the disciples had been traveling around the countryside. Jesus had been doing some miraculous deeds of healing people of various afflictions. He had been teaching and preaching. So, Jesus asked His disciples, “Who do people say that I am?” Jesus must have been perplexed to hear that some people believed He was the prophet Elijah while others thought He was His cousin, John the Baptist. Upon hearing those answers, Jesus asked His disciples, “But who do you say that I am?”

While Jesus addressed that question to His disciples centuries ago, it is still a question He addresses to each individual. “Who do you say that I am?” Peter was ready with his answer. Peter said, “You’re the one God sent to save the world!” Peter was right with that answer, but he lacked understanding as to what that meant. Jesus talked about how He would die and come alive again.

“Suddenly Peter became very angry. ‘That’s not how it’s supposed to happen.’ Peter argued. Jesus knew better and said, ‘Stop thinking about your own plan. This is God’s plan.’”

We know that God’s plan is to save the world and so Jesus is Savior of the world. We know that Jesus is the One who perfectly fulfilled the law and He is the sinless One and so Jesus is Lord. God’s plan is to save the world and Jesus is Savior and Lord, then we have roles in sharing that good news with others who have not heard or believed that message. That is why it is important for us to answer rightly the question Jesus poses to us:

But who do you say that I am?

Almighty God, so often Peter had the right answer, but he got swept up in the moment and acted impulsively. He is a good example for those who are shy and hesitant to speak out. He is a good example in that he is ready to act or to do, even though he may not have thought everything out. Give us boldness to speak out and speak up. Help us to be eager and ready to help, but only after we believe we know what God’s plan is. In the name of Jesus Christ, our Savior and Lord, we pray. Amen.