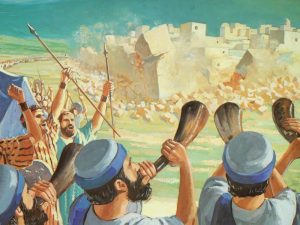 Our sons, Thomas and Stewart, both played in the band during middle school. I remember the tales of how many of the people arrived at band wanting to play the trumpet. There’s something about how that instrument sounds that commands attention.

When the editors of the Spark Story Bible tell the story of The Battle of Jericho, they invite the young readers to: Roll up a piece of paper to make a shofar (a trumpet-like horn) and march around your room blowing it.

And then they tell the story of how God promised the people of Israel that they could capture the great walled city called Jericho. First, seven priests were recruited for a small marching band. They led a parade of soldiers and the people marching around the city as the priests blew the horns. They did this each day for six days while the people of Jericho watched with a combination of amazement and amusement. (If you want the experience, keep blowing your paper shofar while you read this.)

Then, on the seventh day, the parade made seven laps around the city, and after the final lap, on cue as the horns blew, the people of God shouted, and the walls came tumbling down.

Once again, it all worked out just like God had promised!

God, help me to trust that Your promises are true. And help me to learn and live the great promises You make to me as I read more of Your Word. Amen.