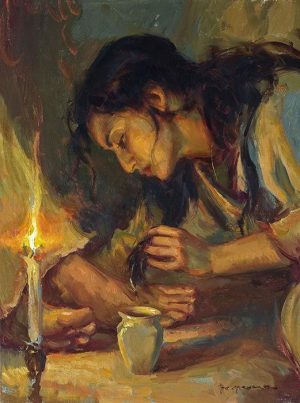 When Jesus had finished saying all these things, he said to his disciples, “You know that after two days the Passover is coming, and the Son of Man will be handed over to be crucified.”

Then the chief priests and the elders of the people gathered in the palace of the high priest, who was called Caiaphas, and they conspired to arrest Jesus by stealth and kill him. But they said, “Not during the festival, or there may be a riot among the people.”
Matthew 26:1-5

The death of Jesus was approaching quickly. He spoke of it in his “passion predictions” here right before Passover. On that terrible upcoming Friday, the disciples would be forced to toss his body into a borrowed grave in a hurried fashion right before the Sabbath. There wouldn’t be time then to prepare for a proper burial. But there was time to start the preparations with the actions of a sweet, Spirit-filled woman.

Now while Jesus was at Bethany in the house of Simon the leper, a woman came to him with an alabaster jar of very costly ointment, and she poured it on his head as he sat at the table. But when the disciples saw it, they were angry and said, “Why this waste? For this ointment could have been sold for a large sum, and the money given to the poor.” But Jesus, aware of this, said to them, “Why do you trouble the woman? She has performed a good service for me. For you always have the poor with you, but you will not always have me. By pouring this ointment on my body she has prepared me for burial. Truly I tell you, wherever this good news is proclaimed in the whole world, what she has done will be told in remembrance of her.”
Matthew 26:6-13

Our actions performed in response to Jesus’ love for us are sometimes noticed and always appreciated.

Dear God, help me to do what I do in response to the love that You have showered upon me in the life, death, and resurrection of Jesus. Amen.