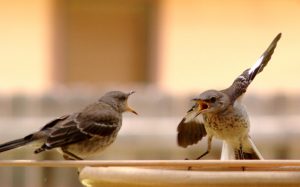 “As charcoal is to hot embers and wood to fire, so is a quarrelsome person for kindling strife.” Proverbs 26:21 (NRSV)

As many of you know Dr. Negley and I have been fans of The Andy Griffith Show for years. We have used scenes from those episodes or entire episodes to illustrate Sunday school lessons and sermons. Andy: The Marriage Counselor provides us with an illustration for these five verses from Proverbs 26.

Fred and Jennie Boone seem to be pleasant enough people when seen on the streets of Mayberry. It is when they are behind closed doors at their home that the ruckuses ensue. The shouting and crashing noises disturb the peace of their neighbors. Sheriff Andy Taylor and Deputy Barney Fife respond to complaints. They make a visit to restore peace and to ensure that no medical attention is needed.

Mayberry’s Finest resolve this disturbance and are later off to fight crime elsewhere. The next day the squabbling and dish breaking continue and the Boones are hauled into the courthouse to appear before Andy. He then resorts to helping the couple learn to communicate better. At breakfast, Fred is to say to Jennie, “Good morning Dear!” and she is to respond to him, “Good morning Honey!” They are to practice these sayings and to refine their tone. The Boones are to come into the courthouse each day for these communication lessons.

Andy and Barney later return to “the scene of the crime,” the Boone home and try to undo the damage done. Within a short while the Boones are just as contentious with each other as ever. As the door to the Boone home closes behind Andy and Barney, the dishes and bric-a-brac start flying and smashing against the walls while the Boones hurl insults and speak angrily to each other. The episode is comedic … making us laugh. It is also tragic … in that we know some husbands and wives do quarrel … and these quarrels can become violent so that property is damaged and injuries may be sustained. In that respect the episode is sad.

O Lord, You have called us to be peacemakers and indeed there are many opportunities for us to practice being peacemakers when there are so many quarrels … in our homes, in the workplace, in our schools, in our communities and sometimes even in our churches. Guard us from being drawn into quarrels. Remind us of Proverbs 15:1 “A soft answer turns away wrath, but a harsh word stirs up anger.” In Christ’s name, we pray. Amen.