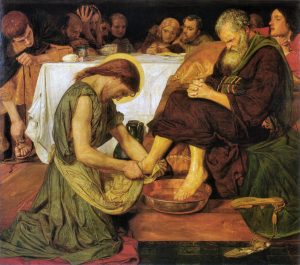 9 As he went along, he saw a man blind from birth. 2 His disciples asked him, “Rabbi, who sinned, this man or his parents, that he was born blind?”

3 “Neither this man nor his parents sinned,” said Jesus, “but this happened so that the works of God might be displayed in him. 4 As long as it is day, we must do the works of him who sent me. Night is coming, when no one can work. 5 While I am in the world, I am the light of the world.”

6 After saying this, he spit on the ground, made some mud with the saliva, and put it on the man’s eyes. 7 “Go,” he told him, “wash in the Pool of Siloam” (this word means “Sent”). So the man went and washed, and came home seeing.

8 His neighbors and those who had formerly seen him begging asked, “Isn’t this the same man who used to sit and beg?” 9 Some claimed that he was.

But he himself insisted, “I am the man.”

10 “How then were your eyes opened?” they asked.

11 He replied, “The man they call Jesus made some mud and put it on my eyes. He told me to go to Siloam and wash. So I went and washed, and then I could see.”

Whenever “the Jews” encounter Jesus in the gospel of John, the author uses that term to speak of people who have already hardened their hearts and minds about Jesus. No matter Jesus’s actions, words, miracles, and indeed, death and resurrection, these characters of the stories are adamant Jesus is not the Messiah. Even when they experience the miracle as begun in John 9, while our Johnannine community sees it as yet again confirmation that Jesus has been sent by God with special, unique abilities as the Son of God, the term “Rabbi” is used instead. Yet certain aspects of Jesus’ teachings too embodies a Jewish teacher, rabbi, as Jesus worked to share God’s good news – Jesus knew the Torah, so he must have been raised a faithful Jew. He cherished each word while also puzzling and debating God’s lesson to the people. He used stories to illuminate deeper truths, what we would call the parables, and He asks questions more than giving answers. While the title Rabbi may encompass parts of Jesus ministry, he is more than a good teacher, more than a scholar, and the gospel of John hints at this confusion when those who do not believe are the only people Jesus encounters who employ the title Rabbi. And the man who now sees, without hesitation, declares Jesus “Lord, I believe.” (John 9:38). May we all be as bold.

Holy One, come into my heart with the power of the Holy Spirit and give me eyes to see throughout this day all the ways Jesus’ teachings as rabbi can illuminate my life. Put Christ’s resurrecting power to work in my life and empower me to be a witness to Christ, and my life may be a song of thanksgiving to You. Amen.