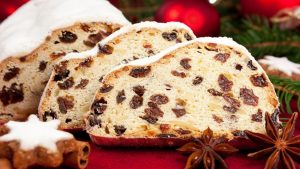 This recipe is from the Amana Colonies in Iowa. I am sure that the Stollen recipe is old but I believe the cranberry salad is from the Colonies after they incorporated during the Great Depression.

My grandmother was from the Amana Colonies. She came to the Colonies in 1856 with the early settlers. I believe she was a child of 4-5 years old. Her parents operated and lived in the South Amana Hotel and Community Kitchen.

Grandmother married a man who was working on the railroad through South Amana. He was staying in the Hotel. Since he was not of the original colonies, they could not live in Amana and settled in nearby Cedar Rapids. My mother and her three older sisters were in there.

I never knew my grandmother but as a child my parents took me to South Amana at least once a month to visit my mother’s cousins. I loved the colonies, their traditions, and wonderful food.

Turn onto floured board and knead 8-10 minutes.

Place in a greased bowl; grease top and cover with a towel. Let rise until doubles, about 1 hour.

Drain raisins. Punch down dough and knead raisins and almonds into dough.

Roll dough into 3 ovals ½ inch thick. Brush with melted margarine. Fold in half and brush tops with margarine.

Place on greased baking sheet. Cover and let rise about 1 hour until doubled.

Frost with a vanilla glaze and decorate with nuts and cherries if desired.

O God, when we read this passage, we think it is all about them; when in fact, we are part of them. Forgive our sins, we humbly ask. Amen.