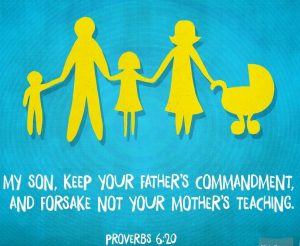 “My child keep your father’s commandment, and do not forsake your mother’s teaching.” Proverbs 6:20 (NRSV)

Have you ever heard the saying printed below?

“When I was a boy of fourteen my father was so ignorant that I could hardly stand to have the old man around. But when I got to be twenty-one I was astonished at how much he had learned in seven years.”

In doing some research, I first learned that the quotation was attributed to the wonderful American writer, Mark Twain. Then I discovered that the quotation first appeared in 1915, five years after Twain died. Also, I learned that Twain’s father died when he was a lad of eleven. Also there are a number of variations of the quotation with different ages of the father and of the son and thus the recognition of how much the father learned in a short number of years. My conclusion: a worthy quotation but not by Twain

During our youth we often do not give our parents’ credit enough for the wisdom they impart. We sometimes think that they have too many rules and that they are too restrictive, thus preventing our learning from experience. Most parents want to protect their children … to make certain that they enjoy a better life than they did during their own youth … and often to shield them from learning things “the hard way.”

Sometimes children do not keep their father’s commandments and forsake their mother’s teachings. Once they have had the opportunity to depart from them, they learn! Then like the character in the quotation above they realize just how wise their parents are … how much knowledge they have gained in a relatively short period of time.

It is wonderful when children keep their father’s commandments and do not forsake their mother’s teaching when they are first given. Unfortunately some children do learn things “the hard way” and only from experience do they understand just how wise their parents are. Whether we are fourteen or twenty-one when we come to that realization, it is a good thing. Psalm 111:10 states, “The fear of the Lord is the beginning of wisdom.” Perhaps then keeping our father’s commandments and adhering to our mother’s teaching are the second steps on that path to wisdom.

Loving God, we thank You for our parents, for their desire to teach us from the benefit of their experience, and for the wisdom they impart. Sometimes it takes us longer to learn, but even learning later is better than never ever having learned. Help us to accept their teaching realizing that they want the best for us, just as You do.