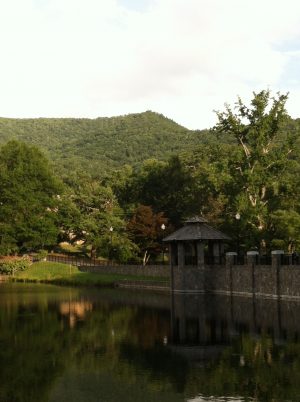 28 About eight days after Jesus said this, he took Peter, John and James with him and went up onto a mountain to pray. 29 As he was praying, the appearance of his face changed, and his clothes became as bright as a flash of lightning. 30 Two men, Moses and Elijah, appeared in glorious splendor, talking with Jesus. 31 They spoke about his departure,[a] which he was about to bring to fulfillment at Jerusalem. 32 Peter and his companions were very sleepy, but when they became fully awake, they saw his glory and the two men standing with him. 33 As the men were leaving Jesus, Peter said to him, “Master, it is good for us to be here. Let us put up three shelters—one for you, one for Moses and one for Elijah.” (He did not know what he was saying.)

34 While he was speaking, a cloud appeared and covered them, and they were afraid as they entered the cloud. 35 A voice came from the cloud, saying, “This is my Son, whom I have chosen; listen to him.” 36 When the voice had spoken, they found that Jesus was alone. The disciples kept this to themselves and did not tell anyone at that time what they had seen.

There is something about the view from the top of a mountain, or let’s be realistic, a hill in Florida. Something about having that ‘top of the world’ view that allows one access where one has been and where they are going. Something about seeing creation all around that realigns one’s perspective. Sometimes getting a ‘bird’s eye view’ allows one to see things in a new light once coming down. Something the disciples who experience the transfiguration, no doubt, came down with as well. Being atop a mountain is persistence and endurance as well as patience and conquering that fear of failure physically allows one to recognize you can overcome that weakness in yourself and see anew those strengths you really, truly have inside.

Sometimes we need to get away and reset to what’s important and a retreat allows that to happen. Some are blessed to take time away at the Retreat center of Montreat NC, or even our own Cedarkirk Camp and Conference Center. Some set time away in a busy week to be sure they are reconnecting with God by going to a physical space in their home.

What awe must have arisen in those disciples atop a mountain with Jesus transforming before their very eyes. To know those who gathered with Jesus was Moses and Elijah, other great leaders and men of deep faith were communing together. How did they reorient themselves after this experience, even as Luke says they stayed silent? Were they truly silent, as we have this written recording in Luke, but also in Matthew (17:1-13) and Mark (9:2-13) as well as referenced in the letters of Paul (2 Peter 1:16-18)? How are we changed?

May you too be attentive to Jesus’ witness in your lives by taking time to be away, maybe to a mountain, to pray and retreat.

Jesus, Beloved Son of God, we offer our thanks and praise that through our opportunities to be apart yet present with You, we are able to be again lights in the shadows and stronger disciples in our daily lives. May we take comfort and rest of Your ultimate plan for each of us. Amen.