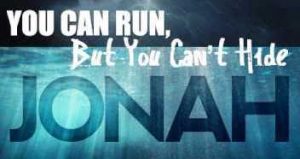 But the Lord hurled a great wind upon the sea, and such a mighty storm came upon the sea that the ship threatened to break up. Then the mariners were afraid, and each cried to his god. They threw the cargo that was in the ship into the sea, to lighten it for them. Jonah, meanwhile, had gone down into the hold of the ship and had lain down, and was fast asleep. The captain came and said to him, “What are you doing sound asleep? Get up, call on your god! Perhaps the god will spare us a thought so that we do not perish.”

The sailors said to one another, “Come, let us cast lots, so that we may know on whose account this calamity has come upon us.” So they cast lots, and the lot fell on Jonah. Then they said to him, “Tell us why this calamity has come upon us. What is your occupation? Where do you come from? What is your country? And of what people are you?” “I am a Hebrew,” he replied. “I worship the Lord, the God of heaven, who made the sea and the dry land.” Then the men were even more afraid, and said to him, “What is this that you have done!” For the men knew that he was fleeing from the presence of the Lord, because he had told them so.

Then they said to him, “What shall we do to you, that the sea may quiet down for us?” For the sea was growing more and more tempestuous. He said to them, “Pick me up and throw me into the sea; then the sea will quiet down for you; for I know it is because of me that this great storm has come upon you.” Nevertheless the men rowed hard to bring the ship back to land, but they could not, for the sea grew more and more stormy against them. Then they cried out to the Lord, “Please, O Lord, we pray, do not let us perish on account of this man’s life. Do not make us guilty of innocent blood; for you, O Lord, have done as it pleased you.” So they picked Jonah up and threw him into the sea; and the sea ceased from its raging. Then the men feared the Lord even more, and they offered a sacrifice to the Lord and made vows.

But the Lord provided a large fish to swallow up Jonah; and Jonah was in the belly of the fish three days and three nights.

The picture we find of Jonah in chapter one of the biblical book that bears his name is about running away from God’s call.

Have you ever had a sense that God was calling you – asking you to do something? And have you ever had a feeling that God was asking you to do something that you didn’t want to do? Maybe you were being urged by this inner voice to walk across the room and befriend the lonely person at the party. Maybe you were being moved to speak up against some racist comment, or to challenge someone who was spreading a rumor. Maybe you thought God wanted you to reach out to a former friend or an estranged family member to try and repair a damaged relationship. Have you ever heard God tell you to do something that was for you difficult or distasteful? Did you do it, or did you run away?

Jonah ran away. He didn’t like the Ninevites. And he didn’t want God to like them either. When he was told to go and tell them about God’s love, grace, and way, Jonah ran away from the assignment. We all might try this from time to time, but it doesn’t work that well. You can run, but you cannot hide from the One who knows what is best. In the biblical accounts of hide and seek, God usually finds us in the end.

Dear God, speak to me so that I may know Your will. And give me the strength to go where You lead, as I follow my loving and living Lord Jesus today. Amen.