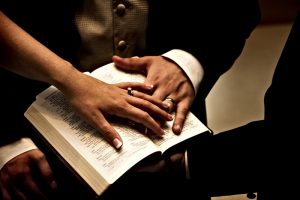 The words “We know all things work together for good, for those who love God, who are called according to his purpose,” had not yet been written by the Apostle Paul in his letter to the Romans. It would be centuries before those words were written. WE do see that promise working out for this woman Ruth.

When our story began in Ruth Chapter 1, our heroine Ruth had married a man named Mahlon and had acquired a loving mother-in-law, Naomi. Within ten years Mahlon had died and Ruth was bereft of her husband. Naomi decided to leave Moab and return to her homeland of Judah and she urged Ruth to return to her home in Moab. Ruth had developed a strong attachment to her mother-in-law and despite Naomi’s protests, Ruth would not abandon her.

In Chapter 2 Ruth and Naomi have arrived in Judah and they resettle in Naomi’s homeland. Their future still looked rather bleak. To support themselves, Ruth works very diligently to glean the fields and to put food on their table. Ruth captures the attention of one of Naomi’s kinsman named Boaz and he quickly becomes enamored by Ruth. Boaz does all he can to make life easier for Ruth. Naomi plays matchmaker and instructs Ruth in the Israelites’ ways. In Chapters 3 and 4 we learn that there is one closer to Naomi than Boaz and he might rightfully redeem the property and take Ruth as wife. That kinsman relinquishes his rights and Boaz redeems the property and Ruth becomes his bride. Life certainly had its ups and downs for Naomi and Ruth. God blesses Ruth and Boaz who have a son, whom they name Obed. Later Obed becomes the father of Jesse, who becomes the father of the future King of Israel, David. Ruth becomes a mother and Naomi becomes a grandmother, neither of which looked possible when their story began. Furthermore Ruth becomes an ancestor of Jesus!

O God, we thank You that we cannot look into a crystal ball to see what the future holds for us. Help us to take life one day at a time. Help us to trust that You want only the best for each of us. As those who love You, keep us mindful that You cause all things to work together for our good. In Christ’s name, we pray. Amen.