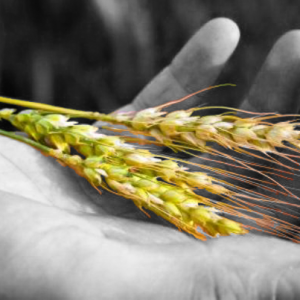 And Ruth the Moabite said to Naomi, ‘Let me go to the field and glean among the ears of grain, behind someone in whose sight I may find favor.’ Ruth 2:2

In Chapter 1 of the book of Ruth, we learned that Naomi’s husband had died after they had gone from their homeland of Judah to Moab. Her two sons had grown up and taken wives from the Moabite people, namely Orpah for Chilion and Ruth for Mahlon. In time Naomi mourned her two sons who had died. Having decided to return to her homeland, she decided to send her loving daughters-in-law, Orpah and Ruth, back to their families. Ruth pledged steadfast loyalty to Naomi and would return with her to Judah. In those days there was no life insurance for Naomi to collect from her husband and since the family was sojourning in that land they most likely did not own any property. Naomi and Ruth depended on charity to meet their daily needs.

Once back in Judah, Naomi became reacquainted with Boaz, a kinsman of her deceased husband, Elimelech. Aware of the law that stipulated that farmers should leave a portion of grain behind for those gleaning the field, Ruth entreated Naomi to let her go glean and so she did. Naomi attracted the attention of Boaz and he inquired about her. He learned how industrious she was in gleaning. He was told how faithful she had been to Naomi, her mother-in-law. Boaz made some special provisions for her: encouraging her to glean with his young women, to follow them, and to drink from the water drawn for them. He bid her to join his reapers for a meal and then instructed his reapers to make the gleaning easier for her and to insure that she harvested a good supply.

Naomi was surprised and overjoyed to see what Ruth had gleaned that day. She asked Ruth about the man with whom she had worked and Ruth revealed that it was Boaz. Naomi responded, “Blessed is he by the Lord, whose kindness has not forsaken the living or the dead! The man is a relative of ours, one of our nearest kin.” Ruth continued to glean throughout the barley and wheat harvests and to reside with her mother-in-law, Naomi. Ruth worked gleaning the fields so that she and Naomi could have food on their table. Ruth acted as the provider for Naomi and her needs.

Dear God, Jesus told us that the poor would always be among us. Help us to be both sensitive and responsive to their needs. In Christ’s name, we pray. Amen.