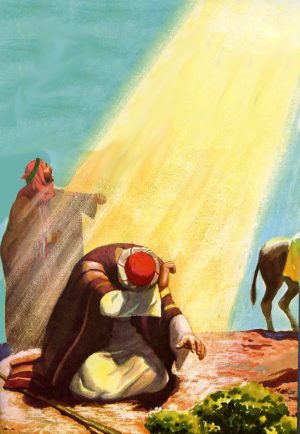 What Saul had was a vision problem! If he saw you and discovered you were a Christian, then he hated you. He was mean and he belonged in jail, which is where he hoped to deliver every Christian he could find! He could not look at a Christian and see the good in him or her.

Oddly enough God loved this man who hated Jesus Christ and those who wore proudly the name “Christian.” Saul was on a mission to Damascus and he intended to round-up as many Christians as he could and take them to Jerusalem. He looked forward to adding more notches to his belt for all the Christians he arrested. Furthermore, God had some big plans for Saul!

On his way to Damascus wind blew up the sand into Saul’s face so he could not see. Saul fell to the ground. Then Saul could not see anything!

A blinding light exploded around him, and a strong voice spoke to him. “Saul, Saul – why do you hurt me?” Saul rubbed his eyes. He couldn’t see anyone. “Who are you?” Saul stuttered. “I am Jesus,” the voice said. “I am not dead. I am very much alive and I have plans for you. Go into the town and wait.” Saul and his men were speechless. They could hear the voice, but they couldn’t see anyone. Saul waved his hand in front of his face. “My eyes! I can’t see! Someone get me up” Saul ordered.

Saul’s men helped him up and led him to Damascus. Saul waited and prayed and then Saul was changed. He wasn’t mean anymore.

God sent a man named Ananias to minister to Saul, but he was at first frightened. Ananias loved Jesus and so he obeyed by going to Saul. Ananias prayed and Saul’s sight was restored.

God said to Ananias, “I have chosen Saul to bring my story to many people. I have a plan for him.” Saul was to tell people about Jesus.

Ananias prayed for Saul and then Saul was filled with the Holy Spirit. Saul now could see physically and could see the good in Christian brothers and sisters.

Saul was baptized and his name was changed to Paul. Paul served God for the rest of his life. He became a friend of Jesus and told many people how Jesus changed his heart.

Heavenly Father, this story teaches us that we should try to look upon the heart of people … not the color of their skin, not the language they speak, nor the country and culture from which they came. Help us to see the good in all people. Help us to share the good news of Jesus Christ with others, namely that You love us and have a plan for our lives. In His name, we pray. Amen.