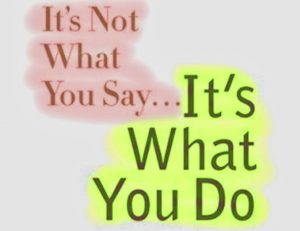 “What do you think? A man had two sons; he went to the first and said, ‘Son, go and work in the vineyard today.’ He answered, ‘I will not’; but later he changed his mind and went. The father went to the second and said the same; and he answered, ‘I go, sir’; but he did not go. Which of the two did the will of his father?” They said, “The first.” Jesus said to them, “Truly I tell you, the tax collectors and the prostitutes are going into the kingdom of God ahead of you. For John came to you in the way of righteousness and you did not believe him, but the tax collectors and the prostitutes believed him; and even after you saw it, you did not change your minds and believe him.
Matthew 21:28-32

It seems, in this parable from Matthew 21, that God is more interested in our faithful actions than simply our words. (There will probably be another parable in the mix about being careful also in what we say, but I digress.) One son told the father that he would not go and work that day, but later his actions replaced his words. Another son promised, with his words, to work for dad, and then his actions negated his statement. And who was praised for doing the father’s will? The one who did, and not just said.

There’s an old saying that goes something like this: “Your actions are speaking so loudly that I can’t hear a word that you’re saying.”

Dear Lord, give me the inspiration and the perspiration necessary so that I might do your will today, as I follow in the footsteps of my Lord and Savior Jesus, in whose name I pray. Amen.