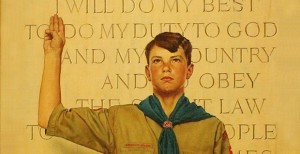 As many Boy Scouts will tell you, there are certain things that are impossible to forget, namely the Scout Law. I learned recently that the Scout Law’s specific virtues vary slightly from country to country, but all uphold outstanding character. The Boy Scout Handbook describes the sixth law as:

A Scout is kind. A Scout treats others as he wants to be treated.

These words sound a lot like Jesus’ second most important commandment to “Love your neighbor as yourself” (Mark 12:31); and what we call the Golden Rule, “do to others what you would have them do to you” (Matthew 7:12).

In the recent past, the Boy Scouts of America have been a controversial organization. Critics cite BSA’s membership obligations as unfair, which has resulted in litigation throughout the country. Regardless of one’s opinion of the BSA and their policies, it cannot be argued that the tenants laid out in the Scout Law are antiquated and need to be changed in a changing world. These virtues outline what not only a Scout should be, but all people.

Heavenly Scoutmaster, be my compass so that I am trustworthy, loyal, helpful, friendly, courteous, kind, obedient, cheerful, thrifty, brave, clean, and reverent. Amen.