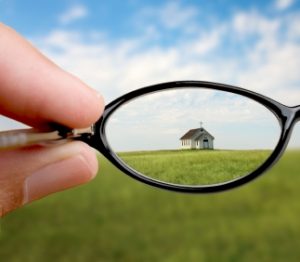 They came to Bethsaida. Some people brought a blind man to him and begged him to touch him. He took the blind man by the hand and led him out of the village; and when he had put saliva on his eyes and laid his hands on him, he asked him, “Can you see anything?” And the man looked up and said, “I can see people, but they look like trees, walking.” Then Jesus laid his hands on his eyes again; and he looked intently and his sight was restored, and he saw everything clearly. Then he sent him away to his home, saying, “Do not even go into the village.”
Mark 8:22-26

Mark’s gospel is a quick overview of the life of Christ. It takes about an hour to read the story from beginning to end, and it might have been intended to be read in one sitting. In the early chapters, we see the Son of God healing, teaching, and performing miracles in the presence of His Twelve Disciples. They watch Jesus, and learn from His words and deeds, and yet these human followers don’t always understand who Jesus is and what He means to them and to the world.

In the second half of Mark’s gospel, Jesus leads His followers toward the truth of what will happen to him at the cross. They will come to more fully understand what Jesus is doing for them and the world as the Son of God. And right in the middle of the story, Mark records the incident of a Jesus healing a blind man.

It’s a two-part healing. (This is one of the very few times when a miracle performed by Jesus isn’t instantly successful.) At first, as a response to the healing touch of Jesus, the man sees (but people look to him like trees walking). Then, after a second touch by Jesus, the man sees clearly.

Maybe this passage says more about those who follow Jesus than it does about the Lord’s healing power. Do I see Jesus being active in my life? Having given Him a second look, so that I can see Him more clearly? Maybe that’s why we read and re-read the gospel stories.

God, thank you for coming to me in the person of Jesus. And thank you for continuing to be present in my life, so that I can see you more clearly as I follow Jesus each and every day. Amen.