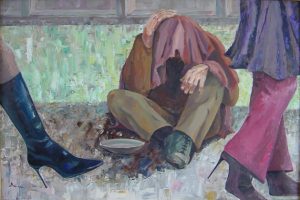 Oppressing the poor in order to enrich one self, and giving to the rich, will lead only to loss.
Proverbs 22:16 (NRSV)

What does oppressing the poor in order to enrich oneself look like?

Could it look like this? A person is invited to a party for someone who is rich. Despite the invitation which reads, “No gifts, please” the guest does not wish to go empty handed to the party. The guest purchases a gift that the honoree does not need and probably doesn’t even want. The guest at least wants to give the appearance that he or she can respond to the invitation with a measure of generosity. The honoree accepts the gift.

O Lord, remind us daily to be good stewards of our wealth. Free us from being selfish. Inspire us to make a difference in people’s lives and to be on the lookout as to how we may show the love and compassion of Christ each day. In His name, we pray. Amen.