Seth: An Heir for Adam and Eve 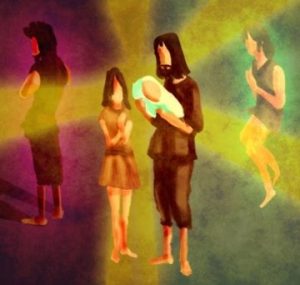 Adam knew his wife again, and she bore a son and named him Seth, for she said, “God has appointed to me another child instead of Abel, because Cain killed him.”
Genesis 4:25

And we thought Adam and Eve’s punishment for eating of the fruit of the tree in the middle of the Garden was almost too great to bear! They were banished from the Garden of Eden. Adam would make a living by the sweat of his brow and his work would be difficult. Eve would endure great pain in giving birth to children.

Adam and Eve were given two sons, Cain and Abel. Then they were bereft of them … not due to accident … not due to disease or sickness …but due to murder. Cain killed Abel! Can you imagine Adam and Eve’s grief? They buried one son, Abel. Their other son, Cain, as a result of his treachery, was condemned by God to be a fugitive and wanderer forevermore. Cain could not go home … to learn whether his parents could forgive him for killing their youngest child, and his brother. Cain could not ever go home … to be embraced by parents, who no doubt still loved him. Adam and Eve thus lost both of their sons and would leave no legacy. It looked as if Adam and Eve would be the end of the line! We have been horrified to hear or read reports of relatives killing relatives. We wonder how such behavior ever got started in our world and yet only 4 chapters into Genesis, the first book of the Bible we read of fratricide. A sad beginning! A painful reminder that terrible tragedies have been with us since humankind’s earliest history!

God blessed Adam and Eve. God gave them another son, whom they named Seth. He could not take Abel’s place. Seth could not make them forget that they were the parents of three sons. And they could never forget that their eldest son had killed their youngest son. Cain had killed his younger brother Abel and his parents had expected their eldest to look out for and to protect his kid brother. They could not forget all of this misery and most likely blamed themselves and each other for having set in motion this trail of tears by eating the forbidden fruit. God who is gracious and merciful, slow to anger, and abounding in steadfast love, gave Adam and Eve another son, who would be their heir.

O Lord, we lament hearing stories of relatives killing members of their own families. Restrain those who would injure or kill those whom we would expect them to love. Comfort and grant Your peace to the survivors who grieve and mourn. In Christ’s name, we pray. Amen.