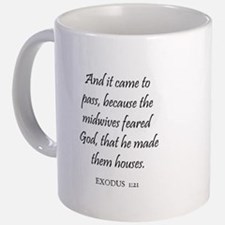 And because the midwives feared God, he gave them families.
Exodus 1:21 (NRSV)

Throughout time it has been difficult for people to stand up to those in authority! For people of faith it has been more difficult to comply with a civil authority when doing so would mean displeasing God. These two midwives found themselves in this latter situation.

The place and time are: Egypt after Joseph and the King of Egypt were no longer exercising rule over the Egyptians. The present King of Egypt had no knowledge of Joseph. The Israelites continued to grow in number and the Egyptians feared that they would overthrow them, so the Egyptians made life very difficult for them. And still more and more Israelite children were being born.

To remedy this situation the King of Egypt called upon two midwives, named Shiphrah and Puah. He instructed them that when they attended Israelite women giving birth that they were to kill the boys, but let the girls live. These midwives feared God and refused to do what the King of Egypt commanded, thus letting the boys live.

Seeing no difference since the King of Egypt put this plan into action, he called on the midwives to account. When the king asked them, “Why have you done this, and allowed the boys to live?” The midwives said to Pharaoh, “Because the Hebrew women are not like the Egyptian women; for they are vigorous and give birth before the midwife comes to them.” The Israelites multiplied and became very strong. God blessed the midwives for fearing him and God gave them families.

With that plot foiled, Pharaoh initiated a “search and destroy” mission. He sent his soldiers out telling them to throw every Hebrew boy into the Nile River, but to let every Hebrew girl live and the evil king’s plan succeeded for awhile …..

Almighty God, we thank You for the witness of Shiphrah and Puah, who disobeyed Pharaoh’s orders in order to obey what they believed You wanted them to do. Even today we as disciples of Christ may be called upon to peacefully resist human-made laws while being true to Your commandments. Give us courage and strength to live as You would have us to do. In Christ’s name, we pray. Amen.