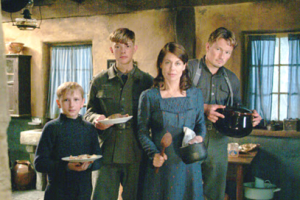 “These things I have spoken unto you, that in me ye might have peace. In the world ye shall have tribulation: but be of good cheer; I have overcome the world.” John 16:33 (KJV)

“For we wrestle not against flesh and blood, but against principalities, against powers, against the rulers of the darkness of this world, against spiritual wickedness in high [places].” Ephesians 6:12 (KJV)

Set in the Ardennes forest of Western Europe on Christmas Eve, 1944, this dramatization of a true story presents hope for love and peace in the midst of the horrors of World War II. Driven by characterization, the story builds in tension as each character arrives on the scene. Having lost her eldest son at the Battle of Stalingrad, a German mother, Elizabeth, takes her son, Fritz, to a hunting camp in the forest in the hopes of keeping him safe and preventing him from joining the Hitler Youth organization. Soon, three American soldiers invade the camp, followed by three German soldiers. The courageous mother welcomes them but insists that they leave their weapons outside. The small group pools their paltry rations for a shared dinner, decorates a tree and sings Christmas carols. As the night progresses, each character reveals personal devastation, sorrows and pain s/he has endured as a result of war. Despite distrust, human empathy grows. The next morning an American MP soldier arrives, turns his rifle on the Germans and begins incredulously to question the situation. When he realizes that no one bears arms, he turns his rifle on the American soldiers and begins speaking with the Germans in their own language. Actually a German soldier who has infiltrated the American lines, he orders the three German soldiers to execute the Americans. When Elizabeth attempts to stop him, he aims his rifle at her, prompting one of the German soldiers to knock him out, saving her. Finally, the soldiers depart with the Americans taking the German infiltrator as a prisoner of war, as well as one of the Germans, since he is only 14 and neither side wants him to die in a future battle. They part, realizing that they must return to their separate sides but recognizing their common faith and humanity.

Since I have been teaching ninth grade English, I have used this film as a culminating activity for a unit on short story literary elements. I show it on the last day before Christmas Holidays. Legally, teachers cannot address the observance of Christmas, but English teachers may teach students how to analyze fiction in all forms. As students complete a Story Map with setting, conflict, rising action, climax, falling action, resolution, they reach their own conclusions concerning the effects of war on individuals, families, and society. German and American characters join in praying, singing Christmas carols, sharing Christmas dinner and personal stories. Obviously, the Christian faith allows the soldiers to rise above the “darkness of the world,” to act on their own beliefs instead of in reaction to the “spiritual wickedness” of their rulers.

“Many years have gone since that bloodiest of all wars, but the memories of that night in the Ardennes never left me. The inner strength of a single woman, who, by her wits and intuition, prevented potential bloodshed, taught me the practical meaning of the words: “Good will Toward Mankind.” Now and then, on a clear tropical winter night, I look at the skies for bright Sirius and we always seem to greet each other like old friends. Then, unfailingly, I remember mother and those seven young soldiers, who met as enemies and parted as friends, right in the middle of the Battle of the Bulge.” Fritz Vincken Interview, February, 1997

Loving God, on this holy night, we are reminded how the enmity harbored against others and class distinction of others can be stripped away to reveal our common humanity. We thank You for stories like this one illustrating how we can be drawn together to share food and fellowship as we celebrate the birth of Jesus, who calls all of us to be His disciples and heirs of Your kingdom. In His name, we pray. Amen.