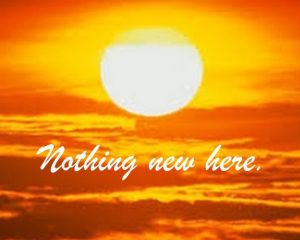 O sing to the Lord, a new song;
sing to the Lord, all the earth.
Sing to the Lord, bless His name;
Tell of His salvation from day to day.
Declare His glory among the nations,
His marvelous works among all the peoples.
For great is the Lord, and greatly to be praised;
He is to be revered above all gods.
For all gods of the peoples are idols,
but the Lord made the heavens.
Honor and majesty are before Him;
Strength and beauty are in His sanctuary….

One of my favorite Romantic composers is Frederic Chopin and I particularly like his polonaises. A favorite of those compositions is Polonaise in A flat major, Op.53, Polonaise Heroique. That composition’s melody found its way into a popular song entitled “Till the End of Time.” The composer of this popular song was Buddy Kaye and the lyricist was Ted Mossman. The song was recorded in 1945 by vocalists Perry Como and Dick Haymes and Les Brown’s orchestra with Doris Day as a vocalist. The two lives of that melody serve to prove what we read in :

“There is nothing new under the sun.”

As one who has dabbled in musical composition and songwriting, I have learned that is true. When I wrote On Bright Sunday years ago, I set the lyrics to the tune: Linstead. When I was asked to compose a song for Three Penny Partner Sundays, I thought I had come up with an original tune. Then one Sunday we were singing a “new” hymn and as we were doing so I thought to myself, this sounds remarkably similar to Three Penny Partners. To my knowledge, I had never heard or sung that tune before wrote the song, but the lyricist and composer did their work in the mid-1980s and I wrote mine in the 2000s. I am convinced it is hard indeed to come up with a “new” song, but that is what the Psalmist invokes us to do.

We certainly can tell how God has saved us day by day. We can marvel at the majesty of each day’s cloud formations. We can declare God’s greatness and how the Lord God alone should be worshipped. In those ways, we can sing a new song to the Lord each day.

Almighty God, while there may be nothing new under the sun, we can sing a “new” song each day praising and thanking You for creating us and saving us. We are truly blessed. Recognizing how blessed we are, we can be the leaders to call all people to worship You. In Christ’s name, we pray. Amen.