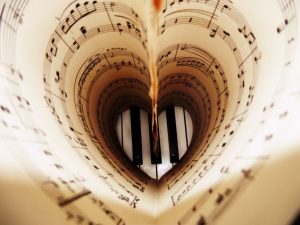 Songs have sometimes inspired scripture (and then scripture inspires another song). Many Bible scholars have noted that Philippians 2:6-11 is transmitted by Paul in his letter to the Christians in Philippi in the form of a hymn. The general line of thought that has emerged is that this “Christ Hymn” pre-dates Philippians, and Paul quoted and adapted it from an earlier tradition.

As imitation may be the sincerest form of flattery, many hymn writers have used the verses from Philippians 2:5-11 as the inspiration for their own creations.

Let the same mind be in you that was in Christ Jesus,

who, though he was in the form of God, did not regard equality with God
as something to be exploited, but emptied himself,
taking the form of a slave, being born in human likeness.
And being found in human form, he humbled himself
and became obedient to the point of death— even death on a cross.

Therefore God also highly exalted him and gave him the name
that is above every name, so that at the name of Jesus
every knee should bend, in heaven and on earth and under the earth,
and every tongue should confess that Jesus Christ is Lord, to the glory of God the Father.

In the scriptural index of the Glory to God Presbyterian Hymnal (that you will find in the pews of our church) these verses are noted as the scriptural foundation for over 25 of the included hymns.

1 O for a thousand tongues to sing
my great Redeemer’s praise,
the glories of my God and King,
the triumphs of his grace!

3 Jesus! the name that charms our fears,
that bids our sorrows cease,
’tis music in the sinner’s ears,
’tis life and health and peace.

Help me, dear Lord, to use songs and scripture and spiritual songs in my worship of You. Amen.