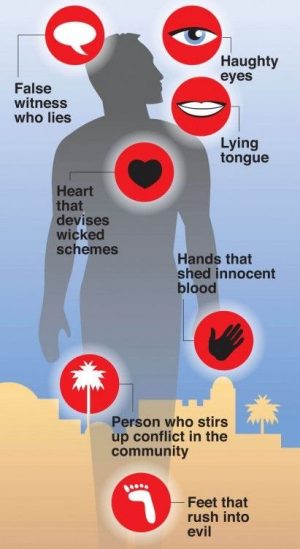 “There are six things the Lord hates, seven that are an abomination to him;….” Proverbs 6:16 (NRSV)

Just what are these six and seven things?

Haughty Eyes: Looking with arrogance or pride … feeling superior to all others

Lying Tongue: Speaking falsely and not meaning a single word of what one says

Hands That Shed Innocent Blood: Killing (literally) someone who has not done anything to you and anything deserving of death or killing (figuratively) someone by speaking words or taking actions resulting in the loss of his or her good name, integrity and reputation

Feet That Hurry To Run To Evil: Being eager and hastening to do what will harm or hurt others

A Lying Witness Who Testifies Falsely: When truth is spoken by a known liar who puts into question “What is the truth … the whole truth … and nothing but the truth?”

One Who Sows Discord In A Family: Stirring up trouble and causing division within the union that most closely resembles the Trinity

Our Father, who art in heaven, of these things that You hate … that are an abomination to You … we humbly ask Your forgiveness, if we are guilty of any of them now. Guard us from such behaviors in the days, months and years to come so that we may be numbered among the saints in glory. In Jesus’ name, we pray. Amen.