Sleeping During the Sermon Can Be Hazardous to Your Health! 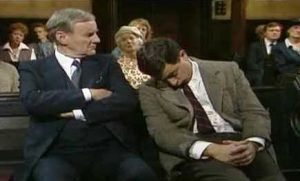 But Paul went down and fell upon him and after embracing him, he said, ‘Do not be troubled for his life is in him.’ Acts 20:10 (NASV)

Acts 20:6-12 is a record of a strange little story that takes place in Troas. Paul and companions had observed the feast of Unleavened Bread in Philippi and five days later arrived by boat in Troas where they would remain for seven days. Paul had intended to leave the next day, but he kept on speaking to the assembly gathered to break bread on the first day of the week. Paul kept on speaking and midnight came! Paul resumed speaking until daybreak!

Lesson 1: It is hard to hoot with the owls late into the night and to join the songbirds heralding the dawn! How long had the worshipers been up that Sunday? Some may have began their day at dawn and their day may have been filled with many activities before coming to worship. We are not told when the service began, but Paul is still proclaiming his message until midnight. When I first came to Winter Haven, I believe we had one Christmas Eve Service at midnight, but it was not well attended. By midnight most people are in bed … and asleep!

Lesson 2: Let there be light! The worship space was well lit which deters sleeping, but does not prevent it! As Paul and others worshipped that night, there were many lamps illuminating the upper room. Light is a deterrent to sleeping unless one is just exhausted or incredibly bored. In our setting while the lights are dimmed during the morning worship service, the sun’s rays spill through the stained glass windows splashing the sanctuary with light. Light is conducive to worship!

Lesson 3: Do not sit on the window sill, especially if the window is open! Eutychus, a young man attending that worship service learned this lesson the hard way! While Paul was preaching, Eutychus’ eyelids grew heavy either from boredom or fatigue so that he fell into a deep sleep. He must have turned or lost his balance and fell from that third story window! The first responders found Eutychus dead from the fall. Here at First Presbyterian our window sills are high and the windows do not open! We are protected from such a misfortune!

Lesson 4: Paul followed the crowd downstairs, embraced the lifeless form of Eutychus and then told those gathered around him: “Do not be troubled for his life is in him.” Paul returned to the upper room, broke bread with them, and resumed proclaiming his message until daybreak. Those below took the boy away alive and they were greatly comforted. Eutychus’ life had been restored by God’s grace and the Apostle Paul’s embrace. Eutychus was given another chance at life and from that time forward I suspect he avoided sitting on the window sill and strived to stay awake during the sermon. Often we do hear of miracles … of responding to medical treatments, of surviving an accident and of overcoming great challenges. Miracles still happen! Though we cannot explain or understand them, we are comforted by them and give thanks to God for them.

O Lord, we thank You for humor! We are reminded of the Sunday school teacher, who asked her class, “Why is it important to be quiet in church?” A little boy responded, “Because people are sleeping!” We thank You for knowing us so well and for understanding when we become drowsy when it is too warm, when the lights have been dimmed, when it is late , when we are exhausted, or when the sermon regrettably is boring and too long. Help us to laugh at ourselves when we need to do so and help us always to be attentive to Your Word. In Jesus’ name, we pray. Amen.