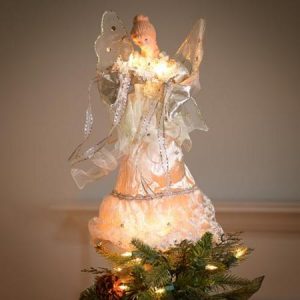 Soon after we were married (five months to be exact), we discovered conflict. Unwisely I assumed every family topped their Christmas trees with an angel. It began when I was very young. Early in my childhood my father brought home our Christmas tree angel. We called her “Angi.” This angel was a cardboard creature rescued from a dumpster. She began life as an insurance company promotion. Requiring cosmetic and structural adjustments (her insurance message was obscured), she reigned at the top of our modest tree. To the delight of my frugal father she cost nothing. With the addition of “Angi,” we were an angel family.

On the other hand, the Biciste family was a star family. Making matters worse their star was an historic Bohemian treasure probably smuggled from the old country past the nose of an Ellis Island custom inspectors. The Biciste star, evidently, was a $40,000 star (or so it seemed).

So to assuage strife – as newly weds – we bought a dove for our tree.

The dove was welcomed.

All went well until ten years later my mother gave us “Angi.” And the long serving angel replaced the dove. Surprisingly a few years later we sadly lost “Angi” – she disappeared! At my insistence a new angel was purchased. I liked the new angel. Many years passed. Then last Christmas we bought a new tree (2016). Angel number two would have to be retired. After purchasing the new tree (who would have known) I learned due to technical difficulties angels were NOT permitted on the new tree. In fact if an angel were to be added the tree would explode and one’s grandchildren would never visit again – not even to “pick up” their gifts.

We now have a lovely star on top of our new tree. The star cost $7.88. The star is compatible with the new tree’s electrical system so no explosions or other calamities. And the star begins a new chapter in our forty-eight year star / angel exchange. I keep imagining I will find “Angi” in a Christmas box that bravely avoided the landfill. Long live Christmas tree angels!

O Lord, we love our families and our traditions. Help us when we need to make adjustments or compromises to maintain harmony and peace within our homes. In Jesus’ name, we pray. Amen.