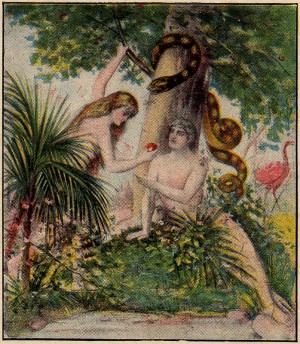 They heard the sound of the Lord God walking in the garden at the time of the evening breeze, and the man and his wife hid themselves from the presence of the Lord God among the trees of the garden. But the Lord God called to the man, and said to him, “Where are you?” He said, “I heard the sound of you in the garden, and I was afraid, because I was naked; and I hid myself.” He said, “Who told you that you were naked? Have you eaten from the tree of which I commanded you not to eat?” The man said, “The woman whom You gave to be with me, she gave me fruit from the tree, and I ate.” Then the Lord God said to the woman, “What is this that you have done?” The woman said, “The serpent tricked me, and I ate…. Genesis 3:8-13 (NRSV)

Genesis chapter 3 contains the story of what we have long called “The Fall.” This is when sin creeps into the Garden of Eden and messes up paradise. For years I read this story as the sad state of sin for all of humanity (and it probably is.) But more recently I have seen this as my own sad story as well. When I look at the words used here in this passage in Genesis, I see that it is a story of sinfulness (for all humans and me) and of self-centeredness.

Adam and Eve were both guilty of doing what God had told them not to do. They had sinned—broken God’s rules and pushed God away. And yet when they were confronted with their sinful behavior, rather than sticking together, they compounded the situation by throwing each other and God under the bus, by just focusing on themselves. (Look at how many times the word “I” is used as they argue with God in verses 8-13.)

While I am a partner in this humanity-wide tendency to sin (The Fall), my own fall is not so much a grand event, as it is a series of continual stumbles. And each one of those stumbles into sinfulness usually begins as I am more focused on myself than I am on God or anyone else. Maybe I will find the good life in paradise as I take my eyes off of the “I” and “me” – and look more to the “Thou” and “we” in each activity and day of my life.

Thank You for designing us to live our lives in a paradise of creation. Help me to realize that the best life comes from taking my place alongside others, following Your word and will. Lead me on that path with Jesus Christ, my Lord and Savior. Amen.