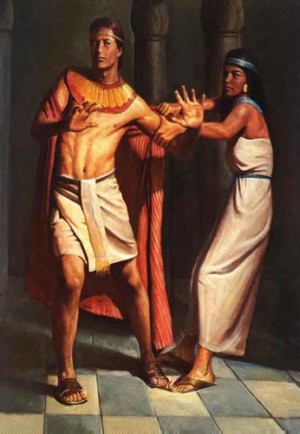 Have you ever wondered when life is going to ease up; even a little? My good friends, every one of us, no matter how strong our faith is, are put through the tests of life. Why are we so tested? Is it that God wants to see if we are strong enough to not give in? Or is it that we ourselves put the element of temptation into our lives by the way we live? We do things that we know we shouldn’t do believing that no one will know. But thinking like that only leaves the door of temptation open; instead of shutting the door and keeping it locked, with God’s help.

Our lesson found in Genesis 39 tells us that even the chosen by God face the perils of temptation. Poor Joseph had already been put through many tests of life; his faith just has to be so strong that allows him to face them and not give up. As we have read in chapter 37 Joseph was the target of his own brothers’ jealousy. He was accused of many things by his brothers that he didn’t do but was made to look that he had. How was he able to overcome all these adversities? He lived close to his Heavenly Father, and this faith was able to bring him through, even the test of being sold by his brothers into slavery. Though mistreated, he did not lose his faith.

When I read our lesson in Chapter 39 my first thought was why is this terrible temptation of sleeping with his master’s wife found in Holy Scripture! I’m sure that the way this story was written would not be something that anyone living in today’s world would ever have to face. The story may not be anything we face in our world. True, but though the story is not anything like we face, the temptation itself may very well be. Temptations can come to us from many directions especially in the moral climate of our day. What we need is to be stronger in our faith than any temptation we may face! This is the lesson given to us from Joseph himself. He said to his master’s wife: “since you are my master’s wife, how could I do this terrible thing and sin against God!” This saying, “and sin against God” can see us through every temptation we may face, no matter what it is; how could I sin against God, my heavenly Father!

O God, Creator and Father of who all who live upon the world, always be with us, no matter what the temptation, may we over-come it because of your Love, seen and known in Jesus Christ, Your Son our Redeemer. Amen.