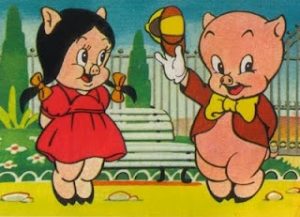 From among all the land animals, these are the creatures you may eat. Any animal that has divided hoofs and is cleft-footed and chews the cud – such you may eat.
Leviticus 11:2b

“Why 7 pairs you may ask?” These were the animals that they could eat and which could be offered as sacrifices to God.”

In the beginning, God made everything that was pleasant to the sight and good for food. God’s provisions for the human beings’ hunger were fruits. On the sixth day of Creation God made all of the animals. God surveyed His work and noted that everything that God had made was good. Their goodness did not mean that all animals were appropriate for human consumption. In the book of Leviticus we learn that dietary laws were given for the welfare of God’s people. Certain animals, birds, insects, fish and seafood were prohibited. One of the unclean animals was the pig.

Now, I may never eat camel or rock badger, but I would sorely miss my pork! I don’t keep kosher. Just the thought of bacon gets my mouth watering. It is rare that a week goes by without my eating at least one to two ham sandwiches. Though I don’t indulge in sausage gravy and sausage balls except near the holidays, I would certainly be sad not to enjoy these foods. And I have not even mentioned pulled pork or pork barbecue!

Except for providing food for Noah and company aboard the ark and for having animals suitable for sacrifice I really don’t know why there were seven pairs of clean animals saved. I am so glad that Porky and Petunia Pig were one pair of unclean animals saved. Their descendants have made significant contributions to my dining table over the years! The other white meat is very popular indeed.

Blessed Lord, we thank You for Your wonderful creation and for providing us with our daily food. Although we do not understand all that You do any why, we trust You and we believe that You want nothing less than what is good for Your people. In Christ’s name, we pray. Amen.