The Best Christmas Pageant Ever (1983) 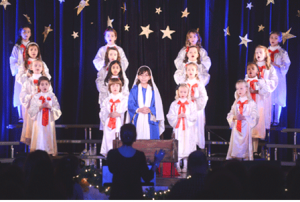 “When the angels had left them and gone into heaven, the shepherds said to one another, ‘Let us go now to Bethlehem and see this thing that has taken place, which the Lord has made known to us. So they went with haste and found Mary and Joseph and the child lying in a manger. When they saw this, they made known what had been told them about this child; and all who heard it were amazed at what the shepherds told them. But Mary treasured all these words and pondered them in her heart. The shepherds returned, glorifying and praising God for all they had heard and seen, as it had been told them.” Luke 2:15-20 (NRSV)

My favorite Christmas movie/book is The Best Christmas Pageant Ever. It is a telling of the Christmas story by school children in an annual Christmas pageant held at the church. An underprivileged family (the Herdmans), with reputations as being the meanest kids in the neighborhood and school, get involved in the play because they hear that goodies are served at the church and that really interested them. In the process of their involvement in the play everyone in the community is horrified and curious to see what they will do. The Herdmans are touched by the story – a baby whose family had no home and had to use a stable for its birth. It changes everyone’s attitude about the story because of the reality of the real actors in the play who give of themselves, poor as they are, to help others.

The book has become a tradition in my family because I have read it to many groups – both young and old – to show how the Christmas story can touch all ages and types of people – providing humor and spirituality. Some of the characters in the story are both funny and touching. It provides a great lesson for all who see it!

O God, it has been said that those who are so physically hungry find it difficult to hear the Good News of Jesus Christ. This Christmas, help us to be compassionate so that we give out bread to satisfy physical hunger as well as presenting Jesus, the Bread of Life, so that people may never be hungry again. Then we can see God working miracles before our very eyes! In Christ’s name, we pray. Amen.