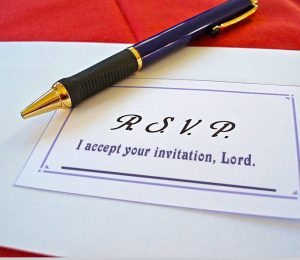 Recently I was at a gathering where some members were lamenting that people do not RSVP when invited to functions. A couple of the members identified this problem as being particular to Polk County residents. I noted that this problem is not limited to Polk County citizens, but seems to be the “way of things” in the times we are living in rather than the location. This is not the presenting problem in this parable that Jesus tells. The invitations went out and the guests did respond. They had been told “to save the date” and they did!

In this computerized age there are many ways to remind people that the event or function is drawing near. It may be an automated reminder call, a text message, or a calendar alert on one’s cell phone. In those days the host sent out slaves to remind those who accepted the invitation that everything was now ready for them to come. The problem here was that the ones who had accepted the invitation now deemed something else to be of greater importance than attending the dinner. Their excuses ran the gamut from inspecting a new piece of property, to “test driving” five new oxen, to having just become newlyweds. They considered that something better had come along and they now had decided to decline the invitation. They made excuses!

Here the host is with mountains of food in the kitchen … the hot food is cooling down the cold food is warming up … and the guest list is shrinking incredibly! Understandably the host is angry, but he will not be undone! He tells his slave to go out into the streets and lanes and bring the poor, the crippled, the blind and the lame to fill the spaces at the table, vacated by the invited guests who have since declined the invitation. And there is still room at the table! The host sends the slave out once again to compel people to come in and fill the house. The host is adamant that those who were invited, who then refused the invitation, will not be able to change their minds again and accept the host’s hospitality.

The Big Dinner is sharing God’s kingdom. We are reminded that this is the greatest invitation we can receive and that we should gladly accept this invitation and honor that commitment. God as the host is determined His house will be filled and those who accept His invitation will be from all walks of life.

Most Gracious God, we thank You for inviting us to the Big Dinner. Help us always to prize highly this invitation and to let nothing hinder our acceptance. We do look forward to that time when people will come from north and from south and from east and from west to sit at table in Your Kingdom and to share the feast which our Lord Jesus Christ has prepared. In His name, we pray. Amen.