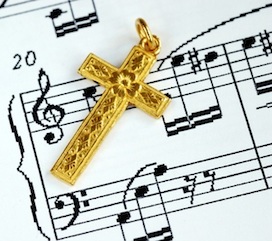 There is one body and one Spirit, just as you were called to the one hope of your calling, one Lord, one faith, one baptism, one God and Father of us all, who is above all and through all and in all.
Ephesians 4:4-6 (NRSV)

For years this has been one of my most favorite hymns, the other two being Now Thank We All Our God and Our God, Our Help in Ages Past. They are the hymns that I have chosen for my services of ordination and installation as a Pastor and Associate Pastor. Listen to the second stanza!

Elect from every nation, Yet one o’er all the earth,
Her charter of salvation, One Lord, one faith, one birth;
One holy name she blesses, Partakes one holy food
And to one hope she presses, With every grace endued.

While I love the churches of which I have been a part and have served as a pastor, this hymn reminds me that the Church is much greater than those particular congregations. My vision of the Church was greatly enlarged after having attended an Ecumenical Seminar for Theological Students outside of Geneva, Switzerland, in the summer of 1985. For the first time in my life, I worshiped with Christians from different countries, denominations, and languages as well as Coptic Christians, Greek Orthodox and Roman Catholics. Also, for the first time I was the stranger, an American Presbyterian, on foreign soil! Having that experience I saw the Church in a new light as being “elect from every nation, yet one o’er all the earth.” After that experience I had a greater appreciation of and empathy for international students who came to study and worship with us at Columbia Seminary.

While our skin colors were different and we spoke different languages, it was clear that our worship centered on the Church’s “charter of salvation, One Lord, one faith [and] one birth.” While we were all in agreement that Jesus Christ is Lord and that bread and grape juice or wine, the elements of the Lord’s Supper are that holy food, this blessed sacrament given to strengthen the Church still proved to be a stumbling block at that gathering. A couple of years later, a group of us had the same experience at the Monastery of the Holy Spirit in Conyers, Georgia. I never will forget one aged monk gathered with others at the altar, looking back at us who remained seated in the sanctuary. He raised his cane signaling that he believed one day Roman Catholics and Presbyterians would be able to share that sacrament. While the one hope to which the Church presses particularly is the kingdom of heaven, is it not also being gathered around the same table to share the Messianic Feast there? Breaking bread and sharing the cup there will no longer pose the problems there that they have in the churches on earth. Thanks be to God!

Dear Lord, we thank You for the sacrament of the Lord’s Supper. WE lament that this gift given for strengthening the Church and its witness has often separated the ones who bear your name, “Christian.” Forgive us. Help us to celebrate that which unites us. Inspire us to work for unity among all Christians as we press on to the hope of life in Your eternal kingdom. Amen.