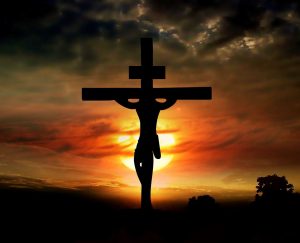 Then he began to teach them that the Son of Man must undergo great suffering, and be rejected by the elders, the chief priests, and the scribes, and be killed, and after three days rise again. He said all this quite openly.
Mark 8:31

Once Jesus rounded the corner in the middle of Mark’s gospel, he was heading toward the cross. Several times in the last eight chapters of Mark, we find Jesus speaking of his upcoming suffering, death, and resurrection (Biblical scholars refer to these as “passion predictions.”)

It becomes clear that the cross was his destination and his destiny.

When I watch Jesus so intently heading toward his death, I am often reminded of some words of C. S. Lewis in his book Mere Christianity (book 2, chapter 4)

“The central Christian belief is that Christ’s death has somehow put us right with God and given us a fresh start ….. We are told that Christ was killed for us, that His death has washed out our sins, and that by dying He disabled death itself. That is the formula. That is Christianity. That is what has to be believed.”

It would do me good to remember each day what the Son of Man has done for me. It’s good to be reminded that I have been put right with God and given a fresh start.

God, let me face today as a new day. Thank You for wiping the slate clean with the cross of my Lord and Savior Jesus. Now use me wholly and renewed for Your work in the world as I share Your love with everyone I meet. In Christ’s name I pray. Amen.