The devotions this week will be based on Genesis 43-44 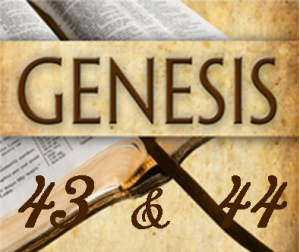 43 Now the famine was severe in the land. 2 And when they had eaten up the grain that they had brought from Egypt, their father said to them, “Go again, buy us a little more food.” 3 But Judah said to him, “The man solemnly warned us, saying, ‘You shall not see my face unless your brother is with you.’ 4 If you will send our brother with us, we will go down and buy you food; 5 but if you will not send him, we will not go down, for the man said to us, ‘You shall not see my face, unless your brother is with you.’” 6 Israel said, “Why did you treat me so badly as to tell the man that you had another brother?” 7 They replied, “The man questioned us carefully about ourselves and our kindred, saying, ‘Is your father still alive? Have you another brother?’ What we told him was in answer to these questions. Could we in any way know that he would say, ‘Bring your brother down’?” 8 Then Judah said to his father Israel, “Send the boy with me, and let us be on our way, so that we may live and not die—you and we and also our little ones. 9 I myself will be surety for him; you can hold me accountable for him. If I do not bring him back to you and set him before you, then let me bear the blame forever. 10 If we had not delayed, we would now have returned twice.”

11 Then their father Israel said to them, “If it must be so, then do this: take some of the choice fruits of the land in your bags, and carry them down as a present to the man—a little balm and a little honey, gum, resin, pistachio nuts, and almonds. 12 Take double the money with you. Carry back with you the money that was returned in the top of your sacks; perhaps it was an oversight.13 Take your brother also, and be on your way again to the man; 14 may God Almighty[a] grant you mercy before the man, so that he may send back your other brother and Benjamin. As for me, if I am bereaved of my children, I am bereaved.” 15 So the men took the present, and they took double the money with them, as well as Benjamin. Then they went on their way down to Egypt, and stood before Joseph.

16 When Joseph saw Benjamin with them, he said to the steward of his house, “Bring the men into the house, and slaughter an animal and make ready, for the men are to dine with me at noon.” 17 The man did as Joseph said, and brought the men to Joseph’s house. 18 Now the men were afraid because they were brought to Joseph’s house, and they said, “It is because of the money, replaced in our sacks the first time, that we have been brought in, so that he may have an opportunity to fall upon us, to make slaves of us and take our donkeys.” 19 So they went up to the steward of Joseph’s house and spoke with him at the entrance to the house. 20 They said, “Oh, my lord, we came down the first time to buy food; 21 and when we came to the lodging place we opened our sacks, and there was each one’s money in the top of his sack, our money in full weight. So we have brought it back with us. 22 Moreover we have brought down with us additional money to buy food. We do not know who put our money in our sacks.” 23 He replied, “Rest assured, do not be afraid; your God and the God of your father must have put treasure in your sacks for you; I received your money.” Then he brought Simeon out to them. 24 When the steward[b] had brought the men into Joseph’s house, and given them water, and they had washed their feet, and when he had given their donkeys fodder,25 they made the present ready for Joseph’s coming at noon, for they had heard that they would dine there.

26 When Joseph came home, they brought him the present that they had carried into the house, and bowed to the ground before him. 27 He inquired about their welfare, and said, “Is your father well, the old man of whom you spoke? Is he still alive?” 28 They said, “Your servant our father is well; he is still alive.” And they bowed their heads and did obeisance. 29 Then he looked up and saw his brother Benjamin, his mother’s son, and said, “Is this your youngest brother, of whom you spoke to me? God be gracious to you, my son!” 30 With that, Joseph hurried out, because he was overcome with affection for his brother, and he was about to weep. So he went into a private room and wept there. 31 Then he washed his face and came out; and controlling himself he said, “Serve the meal.” 32 They served him by himself, and them by themselves, and the Egyptians who ate with him by themselves, because the Egyptians could not eat with the Hebrews, for that is an abomination to the Egyptians. 33 When they were seated before him, the firstborn according to his birthright and the youngest according to his youth, the men looked at one another in amazement. 34 Portions were taken to them from Joseph’s table, but Benjamin’s portion was five times as much as any of theirs. So they drank and were merry with him.

44 Then he commanded the steward of his house, “Fill the men’s sacks with food, as much as they can carry, and put each man’s money in the top of his sack. 2 Put my cup, the silver cup, in the top of the sack of the youngest, with his money for the grain.” And he did as Joseph told him. 3 As soon as the morning was light, the men were sent away with their donkeys. 4 When they had gone only a short distance from the city, Joseph said to his steward, “Go, follow after the men; and when you overtake them, say to them, ‘Why have you returned evil for good? Why have you stolen my silver cup?[c] 5 Is it not from this that my lord drinks? Does he not indeed use it for divination? You have done wrong in doing this.’”

6 When he overtook them, he repeated these words to them. 7 They said to him, “Why does my lord speak such words as these? Far be it from your servants that they should do such a thing! 8 Look, the money that we found at the top of our sacks, we brought back to you from the land of Canaan; why then would we steal silver or gold from your lord’s house? 9 Should it be found with any one of your servants, let him die; moreover the rest of us will become my lord’s slaves.” 10 He said, “Even so; in accordance with your words, let it be: he with whom it is found shall become my slave, but the rest of you shall go free.”11 Then each one quickly lowered his sack to the ground, and each opened his sack. 12 He searched, beginning with the eldest and ending with the youngest; and the cup was found in Benjamin’s sack. 13 At this they tore their clothes. Then each one loaded his donkey, and they returned to the city.

14 Judah and his brothers came to Joseph’s house while he was still there; and they fell to the ground before him. 15 Joseph said to them, “What deed is this that you have done? Do you not know that one such as I can practice divination?” 16 And Judah said, “What can we say to my lord? What can we speak? How can we clear ourselves? God has found out the guilt of your servants; here we are then, my lord’s slaves, both we and also the one in whose possession the cup has been found.” 17 But he said, “Far be it from me that I should do so! Only the one in whose possession the cup was found shall be my slave; but as for you, go up in peace to your father.”

18 Then Judah stepped up to him and said, “O my lord, let your servant please speak a word in my lord’s ears, and do not be angry with your servant; for you are like Pharaoh himself. 19 My lord asked his servants, saying, ‘Have you a father or a brother?’ 20 And we said to my lord, ‘We have a father, an old man, and a young brother, the child of his old age. His brother is dead; he alone is left of his mother’s children, and his father loves him.’ 21 Then you said to your servants, ‘Bring him down to me, so that I may set my eyes on him.’ 22 We said to my lord, ‘The boy cannot leave his father, for if he should leave his father, his father would die.’ 23 Then you said to your servants, ‘Unless your youngest brother comes down with you, you shall see my face no more.’ 24 When we went back to your servant my father we told him the words of my lord. 25 And when our father said, ‘Go again, buy us a little food,’ 26 we said, ‘We cannot go down. Only if our youngest brother goes with us, will we go down; for we cannot see the man’s face unless our youngest brother is with us.’ 27 Then your servant my father said to us, ‘You know that my wife bore me two sons; 28 one left me, and I said, Surely he has been torn to pieces; and I have never seen him since. 29 If you take this one also from me, and harm comes to him, you will bring down my gray hairs in sorrow to Sheol.’ 30 Now therefore, when I come to your servant my father and the boy is not with us, then, as his life is bound up in the boy’s life, 31 when he sees that the boy is not with us, he will die; and your servants will bring down the gray hairs of your servant our father with sorrow to Sheol. 32 For your servant became surety for the boy to my father, saying, ‘If I do not bring him back to you, then I will bear the blame in the sight of my father all my life.’ 33 Now therefore, please let your servant remain as a slave to my lord in place of the boy; and let the boy go back with his brothers. 34 For how can I go back to my father if the boy is not with me? I fear to see the suffering that would come upon my father.”