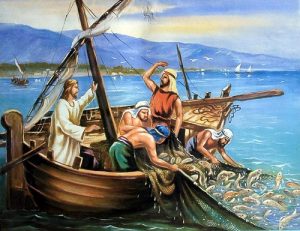 The year was 1982 and I was twenty-eight years old when I entered Columbia Theological Seminary as a freshman. The other designation I bore was that of a “second career” student, unlike students who graduated from college and then went directly to seminary. I had worked in the food service business at a restaurant, hospital, and a nursing home, altogether for six years after having graduated from college. “Six years” did not seem to be long enough to constitute a “first career,” but according to seminary personnel that is how they viewed me.

As I thought about these scriptures today for the first time, I thought Jesus called several “second career” persons to be His disciples. First among these “second career” disciples were two sets of brothers four fishermen called Simon and Andrew, James and John. Jesus called them and gave them a few tips on fishing that led them to some very surprising results after a night with few fish caught to show for their efforts. Obeying Jesus netted them so many fish that the catch nearly sunk their boats. Jesus then challenged these fishermen to fish for people. They gave up fishing that day and they became disciples of Jesus. They followed Him.

“Jesus met seven others that day: Philip, Bartholomew, Thomas, another James, Thaddaeus, another Simon, and Judas. ‘Follow me!’ Jesus said to each of them. Crash! Boing! Boom! They all stopped and dropped what they were doing. Now they were disciples! Now they would follow Jesus.”

O Lord, we thank You for the story of Your disciples … how You called them to be Your disciples and how they dropped what they were doing to follow You. Help us to be Your faithful and obedient servants regardless of our ages and to use our gifts for Your honor and glory. In the name of Christ, we pray. Amen.