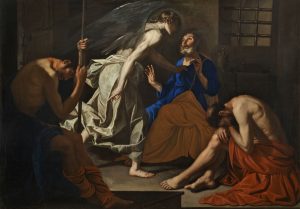 Suddenly an angel of the Lord appeared … Acts 12:7 (NRSV)

One of the most celebrated magicians of all time was Harry Houdini. He was known for incredible escapes … from handcuffs, from strait jackets, and from trunks. Often these confinements were intensified by adding chains and locks or by the trappings being submerged in water. He was truly a remarkable magician and we may never know how he was able to make such daring escapes from these seemingly binding situations.

Our scripture lesson from Acts 12 tells of the amazing escape of Peter from the grips of Herod’s prison. Peter was bound with two chains. He was sleeping between two soldiers … thus one on his left and one on his right. Outside the cell door guards were posted to keep watch.

Miraculously an angel of the Lord appears and a light shines in the cell. The two soldiers sleep while the angel taps Peter on the side awakening him. It’s hard to believe that Peter was not startled or shrieked by the urgent arousal from his sleep. Their slumber goes undisturbed by the light, Peter’s stirrings and the angel’s commands to Peter: “Get up quickly.” “Fasten your belt and put on your sandals.” “Wrap your cloak around you and follow me.”

Peter obeyed although he did not realize the situation was real. He thought he was seeing a vision. Twice they passed by guards unnoticed until they stood before the iron gates leading into the city. The gates opened of their own accord (really?) and they went outside and walked along a lane, when suddenly the angel left him. Then Peter came to himself and said, “Now I am sure that the Lord has sent his angel and rescued me from the hands of Herod and from all that the Jewish people were expecting.” From there Peter went to the house of Mary, where he was given asylum for the night.

The divine escape is fascinating and really inexplicable as the soldiers and guards felt nothing, heard nothing and saw nothing. Miraculously Peter’s life was spared and we know that this was God’s doing! Our “salvation” stories may be vastly different from Peter’s and yet we too may have encountered “angels of the Lord” dispatched to attend to the needs of God’s people.

Years ago I was driving to Virginia on Interstate 77 when a blizzard came through. I hit a patch of black ice and lost control of my Jeep Cherokee, equipped with 4 wheel drive! My vehicle overturned after having gone up an embankment before crashing down on the driver’s side. I had to crawl out of the back. I was badly shaken and blessed not to have any serious injuries. Some “angels” stopped to check on me and to encourage me before I was rescued by a tow truck and found lodging for the night. It was a horrible experience and though I do not know the names of the “angels,” I am certain that they were sent to me by the Lord.

Thank You, Lord, for all of the “angels,” who have been dispatched by You to attend to our needs … to rescue us at various times in our lives. We are grateful for these divine escapes. In Jesus’ name, we pray. Amen.