The Elevator Goes Up … and Comes Down! 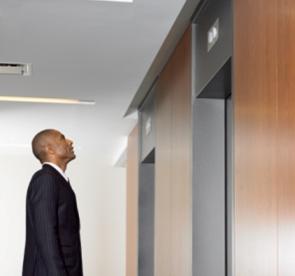 “While he was going and they were gazing up toward heaven, suddenly two men in white robes stood by them. They said, ‘Men of Galilee, why do you stand looking up toward heaven? This Jesus who has been taken up from you into heaven, will come in same way as you saw him go into heaven.” Acts 1:10-11 (NRSV)

Now this could happen most likely anywhere, but a place where it often happens to me and that will serve as a familiar frame of reference for many of you is Winter Haven Hospital. I will be rushing to catch an elevator either to go up or to come down and I will have just missed it.

Then find myself looking up, seemingly most often, for the elevator to come down. I will see it coming down say 7 – 6 – 5 – 4 – 3 – 2 – 1 and I am thinking that I may be able to board and sometimes I am. If, however, someone from the basement has pushed the up button, then the elevator must go down first before it will ascend to the third, fifth or seventh floor, wherever I wanted to go.

And if , between my boarding and going down to the basement, someone has pressed the up button, then the elevator will stop at the first floor before I get to where I was planning … hoping to go. I figure rather than looking up, I might as well get on and go for a ride. Sooner or later I expect to go in the right direction and arrive at the floor to which I have been headed.

The disciples were just staring up at heaven; perhaps even in their mind following Jesus still, when two men dressed in white call them “back down to earth.” They reassure them that Jesus will return in the same way that they had seen Jesus go up into heaven. By these two men’s gentle rebuke, “why do you stand looking up toward heaven?” suggests that Jesus’ return might not be as soon as the disciples were expecting. Jesus had already told them that the time of God restoring the kingdom of Israel is not to be known by them. Knowledge of the promise of Jesus’ return and God’s promise to restore Israel should be enough to comfort them and us! Instead of just gazing heavenward, as Christ’s disciples we have work to do here and now!

O God, someone has said something to the effect that the people most truly orientated toward heaven are the ones who here and now will focus their attention on this world and will strive to make it a better place to live. We know You are Lord and we ask You to help us do Your work faithfully here and trust Your promise to make us heirs of heaven. In Jesus’ name, we pray. Amen.