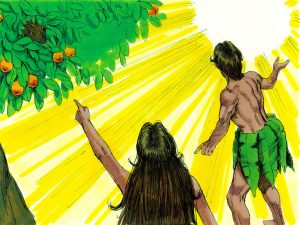 Do you remember playing the children’s game, Hot Potato?” A potato or these days a battery-operated toy made-to-look-like a potato is passed around a circle of players. Those playing the game with a real potato have music playing as the players pass the potato. Those playing with the toy may hear a ticking or some other sound as the toy is passed around. When the music stops or the buzzer in the toy sounds, the person caught with the “Hot Potato” is eliminated from the game.

There they were, Adam and Eve, that is, living in that beautiful garden. God gave them the freedom to eat the fruit of every tree in the garden, except one. Along comes the crafty serpent enticing Eve to eat this forbidden fruit. It looked good, it tasted even better and then she shared the fruit with Adam. In the blink of an eye, their whole world was turned upside down, because they violated the one commandment that the Lord had given them. They realized what they had done because they felt naked and ashamed. They wanted to hide from God, but God called them out from hiding. “’Why were you afraid?’ asked God. ‘Well, I’m naked for one thing,’ said Adam, who was quite embarrassed. ‘So, I hid.’ ‘I see,’ replied God. ‘‘Who told you that you were naked?’ Adam said nothing. ‘Did you eat from the tree I told you not to eat from? Asked God. ‘Eve gave it to me!’ Adam blurted out.” The music stops … the buzzer sounds … Adam wants to hand off the “Hot Potato” to Eve. Eve wants to hand off the “Hot Potato” to the serpent.

Unlike the game of “Hot Potato,” Adam and Eve were not eliminated from playing or living. The rules now were changed. They would have to work hard. They were evicted from the garden. They would experience unhappiness. They would die and return to the dust from which they were made. God would continue to care for Adam and Eve and to provide for their needs. Best of all, God would be with them wherever they went.

O God, thank You for continuing to love, care for and provide for Adam and Eve after they sinned. Thank You for loving us that much too. In the name of Jesus Christ, we pray. Amen.