The First Up and Last Down 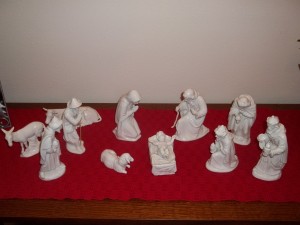 Mary Dukes’ nativity set caught her attention when she first saw it and she immediately knew she had to have it!

Mary writes: “During the 1970s we lived in Wiesbaden, West Germany. While out Christmas shopping in the nearby town of Mainz, I saw this nativity set in a shop window and knew I had to have it. My nativity is made of white Dresden china. Dresden is a city that was formerly in East Germany and my family and I went through the city on an American troop train going to West Berlin. More recently I returned to Dresden–now a part of the new Germany–and I saw a similar set in a department store there.

I have owned my nativity for about 40 years and display it every Christmas in the foyer. It’s usually the first “decoration” to go up and the last thing that I take down. It wouldn’t seem like Christmas without it.”

Thought for the Day: When the nativity set above was bought, there were two Germanys, East and West. Since that time the dividing wall has come down and Germany has been reunited. Have you observed Christ breaking down a dividing wall and bringing peace?

Prayer: Prince of Peace, we thank You that You came to break down walls that divide, to bring unity and peace. We can only imagine how the German people must have felt for their country to be reunified. Help us to be peacemakers in our world. In Jesus’ name, we pray. Amen.