The God of Abraham Praise ~ Hymn 49 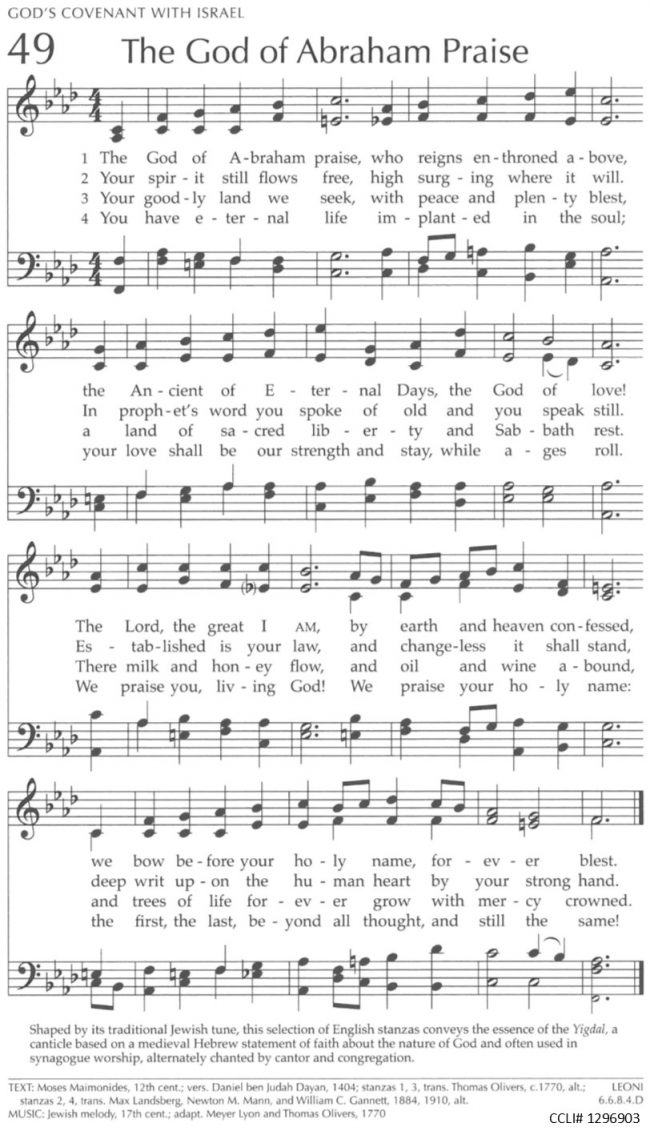 We close out our reflections on the biblical book of Deuteronomy with a hymn with a Hebrew tone. According to musical experts, The God of Abraham Praise is a Christian adaptation of the well-known Jewish hymn Yigdal, loosely translated and Christianized by the evangelist Thomas Olivers after a visit to the Great Synagogue of London in 1770. It was first published in 1772.

This hymn rehearses a good section of the faith that we share in the Judeo/Christian tradition.

The book of Deuteronomy closes with a look back over history, and a hint of what lies ahead for the people of God.

34 Then Moses went up from the plains of Moab to Mount Nebo, to the top of Pisgah, which is opposite Jericho, and the Lord showed him the whole land: Gilead as far as Dan, 2 all Naphtali, the land of Ephraim and Manasseh, all the land of Judah as far as the Western Sea, 3 the Negeb, and the Plain—that is, the valley of Jericho, the city of palm trees—as far as Zoar. 4 The Lord said to him, “This is the land of which I swore to Abraham, to Isaac, and to Jacob, saying, ‘I will give it to your descendants’; I have let you see it with your eyes, but you shall not cross over there.” 5 Then Moses, the servant of the Lord, died there in the land of Moab, at the Lord’s command. 6 He was buried in a valley in the land of Moab, opposite Beth-peor, but no one knows his burial place to this day. 7 Moses was one hundred twenty years old when he died; his sight was unimpaired and his vigor had not abated. 8 The Israelites wept for Moses in the plains of Moab thirty days; then the period of mourning for Moses was ended.

9 Joshua son of Nun was full of the spirit of wisdom, because Moses had laid his hands on him; and the Israelites obeyed him, doing as the Lord had commanded Moses.

10 Never since has there arisen a prophet in Israel like Moses, whom the Lord knew face to face. 11 He was unequaled for all the signs and wonders that the Lord sent him to perform in the land of Egypt, against Pharaoh and all his servants and his entire land, 12 and for all the mighty deeds and all the terrifying displays of power that Moses performed in the sight of all Israel.

It’s good to look back sometimes as we are moving forward in faith. Seeing that the path has been walked faithfully but others might help us stay on track too.

God of Abraham and Sarah, Mary and Joseph, and our fathers and mothers in faith, I thank You for calling me to be a part of Your holy family. As I think back on how You have cared for Your people, let me trust Your care for me as Your child, as I walk the path of discipleship daily, following my Lord and Savior, Jesus, in whose name I pray. Amen.