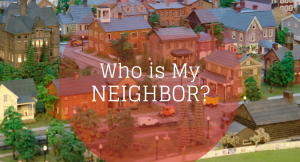 A lawyer wants Jesus to reveal to him who his neighbor is. To answer his question in a powerful and unmistakable way, Jesus tells a parable commonly known as The Good Samaritan. There is one good reason for helping the man who fell into the hands of robbers and lots of bad excuses for not helping him. Let’s look at the bad excuses first.

A Jewish man is going down the road from Jerusalem to Jericho. This road’s terrain made it a great hideout for would-be robbers. In fact, the road was known for reducing travelers to easy marks for being beaten up and robbed. Surely the man knew he was courting danger in traveling on this road and traveling alone. He must have been stupid to travel alone … there would have been safety in numbers. His dress and his moneybag surely signaled to the robbers that “their ship had come in.” They stripped him of his garments. They beat him up and left him for dead thinking he would not survive to identify them. Some people may have said that the man really brought this trouble on himself.

Along comes a priest who represented the highest religious leadership among the Jews. If this man was not living and he touched him, then he would become unclean and therefore unable to perform his ritual duties. He had to protect himself. He may have felt some compassion for him, but he must have rationalized that there were so many more people counting on him to minister in their behalf. He would have been inconvenienced. He passed by on the other side … leaving the wounded man to die.

Then along comes a Levite, a lay associate of the priest. Upon seeing the man he may have considered him to be a decoy … only pretending to be wounded and dying, when in fact he could be in cahoots with the robbers carefully hidden away from view waiting to pounce upon him and rob him as seemingly this man had been robbed. To assist this seemingly wounded man might be putting his own life at risk. This was a chance he was unwilling to take.. He too passed by on the other side of the victim … leaving the wounded man to die. These are all bad excuses for not helping the wounded man.

And then a Samaritan, a foreigner comes by and sees this man in distress. He has compassion for him. He dresses and bandages his wounds. He puts him on his own animal, takes him to an inn, cares for him throughout the night and then gives the innkeeper money to take care of him until he returns. The good reason for helping the wounded man was he was just like this man and the priest and the Levite. They were all members of the human race. The priest, the Levite and the Samaritan could have found themselves in the same predicament as this wounded man. They could have been robbed, beaten and stripped. Would they not have wanted someone to come to their aid regardless of race, creed or culture? The Samaritan was the one who proved to be a neighbor to the wounded man. The Samaritan demonstrates he lives by doing unto others as he would want others to do to him.

Dear Lord, we have heard this story so many times and yet there have been times when we acted as the priest or the Levite. Forgive us. Help us to put ourselves in the shoes of those needing assistance and care. Inspire us to take chances and risks when we know we could make a difference as did the Samaritan. Last, keep us ever mindful of the Golden Rule … to do unto others as we would have them do unto us. In Christ’s name, we pray. Amen.