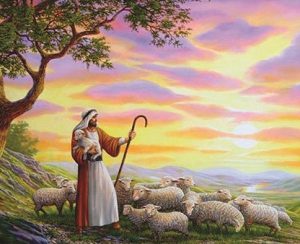 Jesus wanted people to know that He would always love them and take care of them. He called himself the “good shepherd” and told people that they were like sheep. Some people did not understand, so Jesus told them this story.

Once upon a time there was this young novice shepherd who had either 2 or 3 sheep for which to care for a short time. He put them in a makeshift pen made of wood and burlap. One got its nose through the burlap and before long the three had escaped and were running hither and yon in a field bordered by dangers. It very quickly became a wooly situation! Just as the shepherd was wondering if he would ever round-up the sheep, two guardian angel/shepherds appeared and joined in the pursuit. In a short while the crazy lambs were confined again … safe … but disappointed that their lam was so short-lived while the frustrated shepherd caught his breath and the other shepherds laughed. Oh, that’s not the story, but it is a memorable story!

Now the Biblical story! A lamb got lost as evening fell. The lamb was cold and afraid. Meanwhile down in the valley, a shepherd guarded his flock. On the breeze he heard the plaintive cries of the lost lamb. Following the cries, the shepherd made his way through the darkness to retrieve his little one. The shepherd called out to the lamb to assure him he was coming. The shepherd found the scared shivering lamb slightly bruised and scraped. He picked him up, held him close and took him home to his brothers and sisters in the flock in the valley below.

O God, as the Prophet Isaiah noted, “all we like sheep have gone astray.” We are thankful that Jesus the Good Shepherd does not leave us to our devices to return home, which we could not do, but rather comes looking for us. Time and time again, He has sought and found us and reassured us that He loves and cares for us. In response to His goodness, guard us from wandering away. In Christ’s name, we pray. Amen.